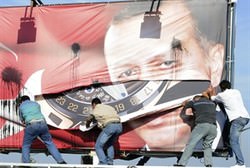 Hundreds of Lebanese of Armenian descent clashed with army troops during a protest Thursday over a visit to Beirut by the Turkish prime minister.

BEIRUT - Recep Tayyip Erdogan is on a two day trip during which he met with officials and visited the north and south of the country. He was inaugurating a hospital in the southern port city of Sidon Thursday as hundreds of protesters gathered in the capital's Martyrs' Square to denounce his visit.

Lebanon has 150,000 Armenians, or nearly 4 per cent of its population, whom harbour deep animosity toward the Turks over the 1915 killing of up to 1.5 million Armenians.

When demonstrators tore up a large poster of Erdogan and pelted troops with rocks, security responded by beating up a number of them.

There were no reports of major injuries.

Erdogan, who also attended a business conference Thursday, warned Israel his country will not keep silent in case it attacks Lebanon or Gaza again.

"They invade Lebanon with the most modern warplanes and tanks, they kill children and destroy schools and hospitals, and they expect us to remain silent?" he asked.

"We will not keep silent and we will stand with all our capabilities with what is right," he said.

Once close allies, ties between Israel and Turkey worsened in the wake of the Gaza war and have practically broken down since Israel's deadly commando raid in May on a Turkish-led flotilla trying to breach the blockade in Gaza. Nine Turks were killed in the raid.

During his visit to Lebanon, Erdogan repeatedly demanded an Israeli apology for the incident.