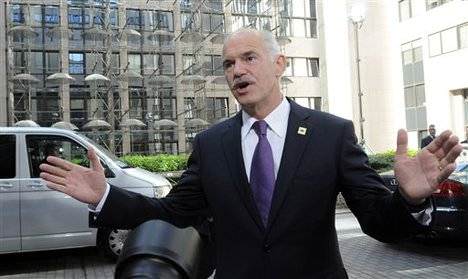 Greek Prime Minister George Papandreou pledged on Friday to build a long-delayed mosque in Athens for Muslim residents, noting that failure to provide such a facility for over two decades was a “disgrace.”

Papandreou added that a temporary official facility for Muslim services would be provided until the completion of a proper mosque, which he said his father had first promised when he was prime minister 25 years ago.

"It is a disgrace that for 25 years, maybe more, since Andreas Papandreou promised the creation of a mosque in the greater Athens area, we have been unable to create such a building," he told parliament.

"We have moved these procedures quickly. There is wide consent on the project," Papandreou said, adding that Muslims had "a right" to a mosque.

Thousands of Muslims from Arab nations, Africa and the Indian subcontinent live and work in Athens without official prayer sites or a cemetery, despite years of promises by successive Greek governments.

Muslims have crafted mosques out of rented flats and disused warehouses which are often targeted in racist attacks.

Earlier this month, top-selling Ta Nea daily said the government would likely pay to build the temporary mosque within six months in a disused navy base in Elaionas, an industrial district near the city centre.

A larger place of worship with enough space for 500 people is to be built in the same area by 2012, Ta Nea said.

Earlier this month, Muslims holding an open-air prayer near the city centre to celebrate Eid al-Adha, were harassed by local residents who threw eggs at them and blared loud music from windows.

Anger towards migrants has increased in recent months as the debt-hit country battles a growing recession that has brought thousands of job layoffs.