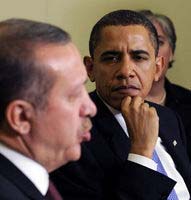 US President Barack Obama has offered his strongest condemnation yet of WikiLeaks' "deplorable" documents dump, as defenders of the website's founder denounced the rush to judgement against him.

The president made his comments in a call to Turkish Prime Minister Recep Tayyip Erdogan Saturday, the White House said.

Obama "expressed his regrets for the deplorable action by WikiLeaks and the two leaders agreed that it will not influence or disrupt the close cooperation between the United States and Turkey," said his office.

The comments, and similar statements in a call to his Mexican counterpart Felipe Calderon, were Obama's most forceful yet against the website, whose steady leaking of a trove of secret US diplomatic cables has polarised opinion.

Obama's call to Erdogan could be seen as an effort to soothe ruffled feathers in Turkey, a key regional US ally. Officials there, including the prime minister have reacted badly to some of the information divulged by the documents.

Spanish online supporters of Assange called Saturday for worldwide demonstrations to press for his release from a London jail, where he is fighting possible extradition to Sweden to face rape allegations.

In a manifesto entitled "For freedom, Say No to State Terrorism," it demanded Assange's release and "restoration of the WikiLeaks domain."

"Given that no one has proved that Assange is guilty of the offences he is accused of and that Wikileaks is not implicated in any of those," the website also urged credit card giants Visa and Mastercard to rescind their decisions to cut off payments from the website's supporters.

But rallies in Madrid and Barcelona drew only about 400 people, and similar protests in Amsterdam and various Latin American capitals drew even smaller crowds.

Assange is due to appear in a London court for a second time Tuesday after being arrested on a warrant issued by Sweden. Prosecutors there want to question him about two women's allegations of rape and sexual molestation.

WikiLeaks insists the allegations are a politically motivated attempt to smear Assange in retaliation for the leak of 250,000 confidential US documents, believed to have been passed to WikiLeaks by a US Army private.

Assange, a 39-year-old Australian, has been transferred from the main section of Wandsworth prison to an isolation unit, according to Jennifer Robinson, a member of his legal team.

The Amsterdam rally was sponsored by the Dutch Pirates Party "to call for protection of freedom of the press" and "to express displeasure with the attempt to silence" sites such as WikiLeaks.

In Mexico City, about 40 protestors demonstrated outside the British embassy, pasting signs that read "no to censorship" and "the Internet was born free" on its walls.

In Peru, about a dozen Assange supporters gathered peacefully outside the British Embassy in Lima, where protestors stressed that the Assange's values "affect us all."

"Solidarity has no boundaries. Injustice is injustice in any part of the world," protestor Jorge Meneses, 22, told AFP.

In Bogota, only about 15 people turned out for the demonstration there. A protest in Lisbon drew several dozen people, some of them carrying photos of Assange or signs calling for freedom of the web.

Meanwhile, newly divulged US diplomatic cables revealed a row between the Vatican and Ireland over a child abuse inquiry.

The Holy See on Saturday questioned the reliability of the cables released by WikiLeaks, which indicated it had refused to cooperate with an Irish probe into child sex abuse by Catholic priests in Dublin.

In other disclosures, a leaked cable revealed that the United States and New Zealand have resumed intelligence collaboration after a 25 year break, according to the Wellington Star Times, which published the cable.

And mining giant BHP Billiton was said to have lobbied the Australian government hard to bring down a proposed 19.5 billion US dollar deal between its rival Rio Tinto and China's Chinalco.

Spokesmen for BHP and Rio Tinto refused to comment.

Assange's attorneys said that while he was getting no recreation time in prison, was having difficulties getting phone calls out, and was not allowed to have a laptop in his cell, he was in "very good" spirits.

He was however "frustrated" that he could not answer the allegations that WikiLeaks was behind cyber attacks launched on credit card firms that have refused to do business with the website.