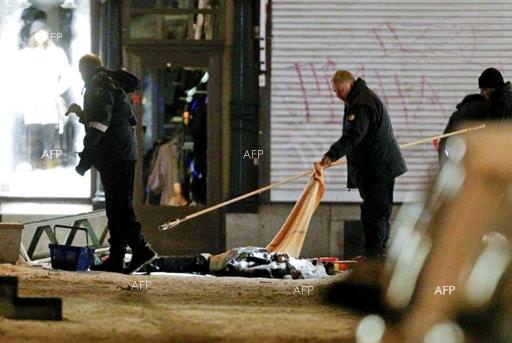 Sweden probed two bomb blasts that killed a person in central Stockholm as a "terrorist crime", as an Al-Qaeda-linked website claimed one of its militants had carried out the suicide attack, AFP reports.

Saturday's explosions -- a suspected suicide attack and separate blast -- targeted Christmas shoppers in a busy pedestrian quarter of the Swedish capital. Two people were also injured.
"We are opening an investigation into a terrorist crime," Anders Thornberg, head of the security unit of domestic intelligence Saepo, said Sunday. "We suspect that it was a suicide attack."
The man who died may have been the attacker, Thornberg added, but noted: "We will not draw conclusions too quickly."
"If this was a suicide attack, it will be the first in Sweden," he noted.
Meanwhile an Islamist website called Shoumoukh al-Islam published a photograph of the man it said was the attacker.
"It is our brother, mujahid Taymour Abdel Wahab, who carried out the martyrdom operation in Stockholm," it said. The photograph showed a man in dark glasses and Western clothes.
Wahab reportedly studied at the University of Bedfordshire in Luton, north of London, and continued to live in the town in recent years, reported The Guardian, The Daily Mail and The Daily Telegraph.
The wife and children of Wahab -- said to be in his late 20s -- were reportedly still living in Luton.
"I used to see him around often. He didn?t say much but seemed nice. I used to see him walking with his kids," Tahir Hussain, 33, a taxi driver who lives nearby told The Telegraph.
"I was shocked when I heard what happened because I never thought he could do such a thing."
The same photo was published in the Swedish newspaper Expressen on Sunday with the face blurred. An official for the paper's photo department told AFP that there was "quite enough evidence" to say that it was the picture of the attacker.
But a Saepo spokeswoman, Carolina Ekeus, refused to comment on the Islamist website's claim.
About 10 minutes before Saturday's blasts, the TT news agency and Saepo received an email, which included audio files in both Swedish and Arabic, in which the suspected attacker addresses "Sweden and the Swedish people."
"Our acts will speak for themselves," TT quoted the message as saying. "Now your children, your daughters and your sisters will die as our brothers, our sisters and our children are dying."
The message referred to the Swedish military presence in Afghanistan and to Swedish artist Lars Vilks, who has been the object of constant threats since his drawing of the Muslim prophet with the body of a dog was first published in 2007.
Overnight, Swedish Foreign Minister Carl Bildt already described the events as a terror attack on his Twitter feed.
But Swedish Prime Minister Fredrik Reinfeldt later cautioned against drawing hasty conclusions.
"It's completely unacceptable for this to happen in Sweden but a lot of questions still have to be answered before we can draw any conclusions," he said.
"Three things happened last night, a car exploded ... a man died and Saepo and (news agency) TT received a message threatening Sweden. The three events are not confirmed as having any link to each other," he told reporters.
He slammed the bombings as "unwanted and unacceptable," pointing out that Sweden is "open society which has shown it is willing that people with different beliefs and backgrounds and Gods can live side by side with each other in an open society and democracy that functions well."
Saepo -- which is now working under the direction of Sweden's chief prosecutor Tomas Lindstroem -- took charge of the probe at 9:00 am (0800 GMT) Sunday, when the attacks were classified as a terrorist crime, Thornberg said.
He said two people were injured when a car packed with gas canisters exploded around 5:00 pm Saturday in the busy Drottninggatan shopping street. A second blast occurred shortly afterwards about three hundred metres (yards) away, killing a man.
Swedish media said the man had been found with a backpack containing six "pipe bombs," only one of which exploded, injuring him critically in the stomach area.
A bag full of nails was also found near the dead man, media reported.
"The fact that the device also contained fragments shows that the intention was to mutilate and kill," bomb disposal expert Bo Janzon told the TT news agency.
Despite that, Stockholmers carried on business as usual on Sunday, and Drottinggatan was full of Christmas shoppers.
"We haven't been affected, we don't feel scared," said 28-year-old Anton Ziden, who was shopping with a friend.
In the English version of the e-mail sent to TT and Saepo, obtained by AFP, the man addresses his wife and children, and apologizes for lying to them.
"It wasn't easy to keep secrets from you, my travels to the Middle East wasn't for business, it was for jihad," he says. "Accept me as a martyr, and my request from you is to pray."
"And to all hidden mujaheddin in Europe and especially Sweden it is now the time to strike, even if you have only a knife to strike with, and I know that you have more than that," the message ends.
Germany and Turkey on Sunday condemned the Stockholm blasts.