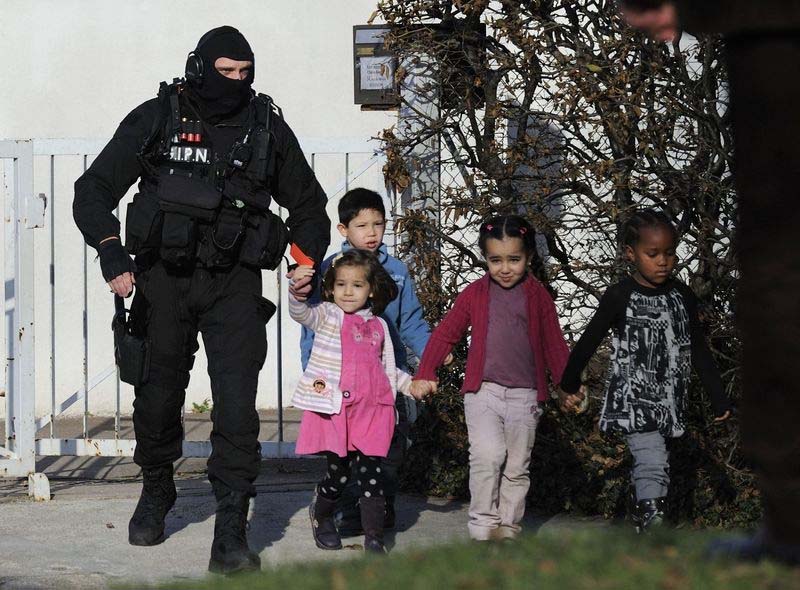 Brandishing two swords, the 17-year-old's orders to the French kindergarten teacher were short and sharp. “This is a hostage-taking - draw the curtains,” he yelled at Nathalie Roffet before forcing her to select five pupils who should remain captive.

Besancon - The hostage-taking on Monday in France's eastern city of Besancon ended without bloodshed when all hostages were freed unharmed, but for several hours teacher Roffet had to pander to the whims of a suicidal teenager.

She said nobody noticed the kidnapper, whom officials named only as "K" because he is a minor, when he walked into the school at the start of class as though he were dropping off his little brother or sister.

But then he walked into her classroom full of three- and four-year-olds and told her and her two teaching assistants what he was up to.

One of the assistants managed to sneak out and alert the school director, who had the rest of the one-storey building evacuated and called the police.

Roffet, a 37-year-old who has been teaching for five years in the Charles-Fourier school on a public housing estate in Planoise on the edge of Besancon, said she tried to make things as normal as possible for the children.

"We did drawing, jigsaws and sang songs as usual. In fact, I carried on with the class as he was on the phone with the (police) negotiators," she told reporters shortly after her ordeal.

"The children didn't really know what was going on," she said but added that "some of the boys were intrigued by the two swords he was holding".

The teen hostage-taker never let go of his two 30cm swords, but Roffet said she never felt she or her pupils were in danger.

"He looked completely lost and stayed huddled in a corner," she said, noting that she believed "the violence was not directed against the children but against himself".

"K" appeared exhausted and "was crying on the phone" while he spoke to the police negotiators positioned outside the building.

"I told him I couldn't keep the children for long," she said.

The teenager agreed to let six youngsters go. They left along with the remaining teaching assistant. Then the assistant came back to get another 10 children to be freed, with just five to be left in the room.

"I chose the five children who were the most calm, those who were best able to stay with me," said the teacher.

As midday approached, Roffet told her captor that the children would soon need to eat. He agreed.

Heavily armed police who had entered the building pretended to bring food to the door of the classroom and called the children by their names and told them to come out one by one.

"K", still huddling in a corner, let them all go until he was left alone in the room.

Officers then moved in and overpowered him with a Taser stun gun, police said.

Education Minister Luc Chatel, who said the hostage was "a clearly depressive individual who never had any other demand but to put an end to his own life", praised Roffet for her courage in the face of danger.