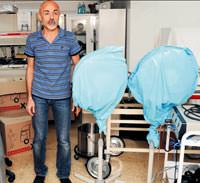 A prosecutor charged in court Tuesday that seven Kosovans on trial in Pristina were part of an elaborate international network that traded in the organs of people living in extreme poverty.

European Union Prosecutor Jonathan Ratel told the crowded Pristina District Court that the men, including a former senior Health Ministry official, promised poor people from Moldova, Kazakhstan, Russia and Turkey up to $20,000 (€14,500) for their organs.

The prosecutor, who serves in Kosovo as part of the EU's rule of law mission, alleged that what he called an organ-harvesting ring recruited about 20 foreign nationals with false promises of payments in 2008.

The seven men have pleaded not guilty to charges ranging from trafficking in persons to unlawful practices of medicine and abuse of power. None of them is in custody. Two other suspects, a Turkish and an Israeli national, remain at large.

Tuesday's session was adjourned until Jan. 6 to give the prosecution more time to provide additional documents.

The prosecution has alleged that Kosovo surgeon Lutfi Dervishi is the ringleader of the group.

A Belgrade-based daily newspaper, Blic, has claimed that Dervishi is also linked to the Kosovo Liberation Army's alleged kidnapping and killing of Serb civilians for their organs.

According to the court's indictment, obtained by The Associated Press in November, Dervishi attended a medical conference in Turkey in 2006 and asked for someone who could perform organ transplants. He was contacted by a Turkish man, Dr. Yusuf Sonmez, six months later.

Dervishi and Sonmez then carried out operations in a private medical clinic in the capital, Pristina. The clinic was managed by Dervishi's son, Arban, who has also been indicted.

The indictment says an Israeli citizen, Moshe Harel, was involved in identifying, recruiting and transporting victims and "ensuring the delivery of cash payments prior to surgery." Four other Kosovans, doctors Sokol Hajdini and Driton Jilta, and anesthesiologists, Islam Bytyqi and Sylejman Dulla, are also indicted.

Sonmez and Harel are listed as wanted by Interpol. Sonmez is the subject of several criminal proceedings in other countries, including Turkey, for human trafficking and removal of organs.

Police were alerted to the network in November 2008, when a Turkish man, Yilmaz Altun, appeared exhausted at Pristina airport while waiting to board a flight home. When questioned by police, he said he had donated his kidney to an Israeli recipient. Kosovo law forbids the removal and transplant of organs.

Altun was arrested and identified Sonmez and Harel from photos, according to the indictment.

On searching the doctors' clinic, police found an Israeli citizen in postoperative care, and a human kidney. They seized medical and business records, computer files and medications.

Suspects, along with Permanent Secretary in the Ministry of Health Ilir Rrecaj — who was fired for allegedly giving the clinic a license — were arrested on Nov. 4, 2008, according to the indictment. All have denied the Kosovo court's accusations.

Allegations of the Kosovo Liberation Army's alleged trade in civilian organs stem from a book by U.N. War Crimes tribunal prosecutor Carla Del Ponte, based on information she has said she received from Western journalists.

In response to the allegations, Swiss senator Dick Marty led a Council of Europe team of investigators to Kosovo and Albania in 2009.

It will then be debated by the Parliamentary Assembly in Strasbourg on Jan. 25th, the council said.