Nepal plane crash kills all 22 on board 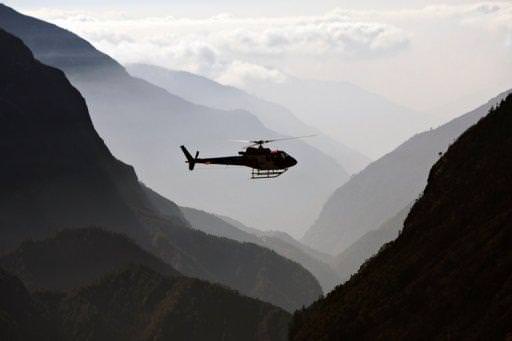 All 22 passengers and crew on board a small passenger plane that crashed in a mountainous area in eastern Nepal were killed, the head of the rescue operation said Thursday.

The Twin Otter plane carrying three crew and 19 passengers including one American smashed into a mountainside shortly after taking off from a small airstrip 140 kilometres (90 miles) east of Kathmandu on Wednesday afternoon.

"All the bodies have been recovered and most of them can be identified. Army helicopters are now bringing the bodies to Kathmandu," the head of the rescue operation Bimlesh Lal Karna told AFP.

"It appears that the plane was flying very low and its left wing clipped the top of a mountain, which caused it to crash."

However, Karna said rescuers were still searching for the plane's black box data recorder, and could not rule out a mechanical failure.

The US embassy in Kathmandu confirmed that one of the passengers was an American citizen and said it was in touch with the man's family.

The other 18 were initially said to be Nepalese, but are now thought to have been religious tourists from Bhutan who chartered the Tara Air plane to take them to a Buddhist holy site in the area.

Kamala Gurung, managing director of the Travel Light Trekking agency, which organised the charter flight, said she had been told all the passengers in the group would be Nepalese.

However reports said they had claimed to be locals to qualify for lower prices, and police said identity documents from Bhutan had been found at the crash site.

A team of Bhutanese officials is travelling to Nepal to establish whether the victims were from Bhutan and to repatriate the bodies if necessary, Nepalese tourism ministry spokesman Laxman Bhattarai told AFP.

Air travel is popular in Nepal, which has only a very limited road network. Many communities, particularly in the mountains and hills, are accessible only on foot or by air.

Aviation accidents are relatively common, particularly during the summer monsoon, when visibility is usually at its worst.

Last month a helicopter crashed near Mount Everest during a mission to rescue two stranded climbers, killing the pilot and an engineer.

In August, a plane headed for the Everest region crashed in bad weather killing all 14 people on board, including four Americans, a Japanese and a British national.

An investigation blamed the crash on a power failure. It said the plane's generator failed and the pilot did not follow the proper procedures to conserve the remaining battery power.

Tara Air is a subsidiary of Yeti Airlines, a privately owned domestic airline founded in 1998 which runs a service to many remote destinations across Nepal.

Yeti's last major accident was in 2008 when a passenger plane crashed on landing at Lukla airport, the gateway to Mount Everest, killing all 19 people on board, most of them German tourists.