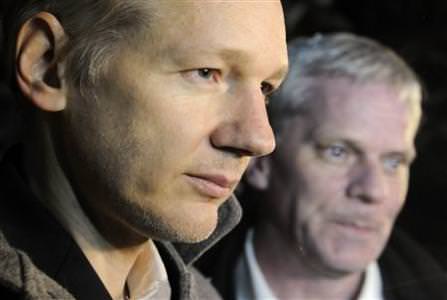 (Reuters) - A weary-looking Assange spoke to a crowd of journalists and supporters waiting in the snow outside Britain's High Court five hours after a judge said he could be released on 200,000 pounds ($312,000) bail under stringent conditions.
"It's great to smell fresh air of London again," Assange, illuminated by a blizzard of photographers' flashes, said.

"I hope to continue my work and continue to protest my innocence in this matter," said the 39-year-old Australian, flanked by his lawyers.

WikiLeaks has angered U.S. authorities by publishing hundreds of a trove of 250,000 U.S. diplomatic cables, including details of overseas installations that Washington regards as vital to its security.

Assange thanked "all the people around the world who have had faith in me," and the British justice system "where if justice is not always an outcome, at least it is not dead yet."

Assange, wearing a dark suit and open-necked white shirt, brandished court papers titled "Swedish Judicial Authority vs Julian Paul Assange." He was then driven away in a four-wheel-drive vehicle.

Assange has spent nine days in a London jail after Sweden issued an arrest warrant for him over allegations of sexual misconduct made by two female WikiLeaks volunteers. Assange denies the accusations.

Assange told reporters soon after his release that he was more concerned the United States might try to extradite him than he was about being extradited to Sweden.

Assange and his lawyers have voiced fears that U.S. prosecutors might be preparing to indict him for espionage over WikiLeaks' publication of the documents.

The New York Times said on Wednesday federal prosecutors were looking for evidence that he had conspired with a former U.S. Army intelligence analyst suspected of leaking classified documents.

Shortly before Assange's release, his mother Christine, who had flown over from Australia, said she could not wait to see her son and "to hold him close."

High Court Justice Duncan Ouseley upheld a lower court decision to release Assange on bail, rejecting an appeal by British prosecutors who had argued he was a flight risk.

As a condition of bail, Assange must live at Ellingham Hall, a country mansion and farm in eastern England that is the home of a former army officer and Assange supporter, Vaughan Smith.

Assange must also abide by a curfew, report to police daily, and wear an electronic tag.

Smith said his mansion, set in sprawling grounds, would offer Assange peace and security. "It's quite hard to get too close without trespassing," he told Sky News. "The Internet is not so good though."

This seemed to be "representative of a gradual shift to a lack of rule of law in U.S. institutions that needs to be exposed and that we have been exposing," he said.

Assange's lawyer Mark Stephens accused Swedish authorities of pursuing a vendetta against his client. He said the cell in London's Wandsworth prison where Assange was held had once been occupied by the writer Oscar Wilde, who spent part of his sentence for gross indecency at the jail in the 1890s.

A full extradition hearing is expected in early February.

By Isabel Coles and Avril Ormsby