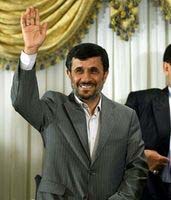 Iranian President Mahmoud Ahmadinejad said Saturday that after the Turkish city of Istanbul, Brazil and Iran would next serve as venues for nuclear talks between Iran and six world powers.

"The nuclear talks in Geneva were fruitful. I hope the same positive course will be continued in Istanbul, and after that in Brazil and Tehran," he said in a live interview with the state television network IRIB.

Ahmadinejad was referring to negotiations with Britain, China, France, Germany, Russia and the United States over Iran's nuclear programme.

Iran says its uranium-enrichment programme is purely meant for energy generation, but the West fears it is designed to build a nuclear bomb. The United Nations Security Council has hit Iran with several rounds of sanctions over the issue.

Ahmadinejad has repeatedly insisted that other countries besides the six world powers - namely Turkey and Brazil - should not only be involved in the talks, but also serve as meeting hosts.

Driving Ahmadinejad's argument is the fact that Turkey and Brazil have not only supported Iran's right to pursue peaceful nuclear projects, but also were the only two countries that voted against the latest Security Council resolution on Iranian sanctions.

The two nations were also involved in a deal inked in May in Tehran on a uranium swap that would see Iran store at least 1.2 tons of its low-enriched uranium in Turkey, to later exchange it with nuclear fuel for its medical reactor in Tehran.

Ahmadinejad, as well as Ankara and Brasilia, believe that the swap deal could be one of the only options to settle the five-year dispute over Iran's controversial uranium enrichment.

The six world powers agreed in Geneva last week to hold the next round of talks in Istanbul, but said that Turkish officials could not attend the talks - just as Swiss officials did not attend the Geneva meeting either.

Ahmadinejad said the return to the negotiation table in Geneva showed that the world powers had "failed" despite several rounds of sanctions meant to "deprive Iran from its nuclear rights."

"The world powers must once and for all acknowledge Iran's nuclear rights, and it is now time to turn the path of confrontation into cooperation," he said.

"Right from the beginning, we have stressed that we want to follow the path of cooperation and discuss global political and economic challenges and even discuss nuclear cooperation," he added.

Ahmadinejad and his new foreign minister, Ali-Akbar Salehi, have shown willingness to improve ties with the world powers and seek a way out of the nuclear dispute, but categorically reject making any concessions over the country's nuclear rights.