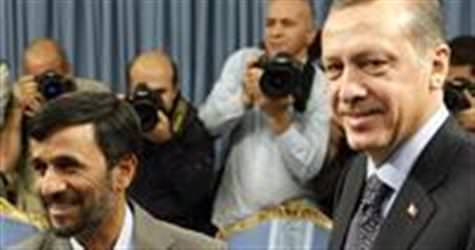 Iranian President Mahmoud Ahmadinejad heads to Turkey on Thursday for a regional summit, as the two neighbours bolster ties in the face of international pressure on Tehran over its nuclear programme.

Ahmadinejad will be accompanied by his new foreign minister and atomic chief Ali Akbar Salehi on the visit, which comes before a second round of nuclear talks between Iran and world powers scheduled for late January in Istanbul.
Turkey has grown closer to the Islamic republic in recent years under the Islamist-rooted administration of Prime Minister Recep Tayyip Erdogan as Ankara seeks to play a more influential role in the Middle East region.
Ankara has repeatedly called for sustained diplomacy to resolve the standoff over Iran's nuclear programme, which the West, headed by the United States, suspect is masking a weapons drive.
Iran denies the charge and has pressed on with the atomic work in defiance of several UN Security Council resolutions demanding Tehran halt sensitive uranium enrichment work.
In June, NATO-member Turkey irked the United States by voting against fresh UN Security Council sanctions on Iran, insisting that a nuclear fuel swap deal it hammered out with Tehran, together with Brazil, should be given a chance.
Faced with increasing isolation by the West, Iran has sought to strengthen ties with Muslim countries and Salehi said last weekend that Tehran's top priority will be to boost ties with regional powers Saudi Arabia and Turkey.
"Turkey is a powerful country with strategic position and shares common cultural and ideological grounds with Iran," Salehi said as he officially took charge on Saturday.
Iran has also welcomed Turkey's position on the Middle East conflict and its criticism of the Islamic republic's arch-foe, Israel.
Turkey's relations with the Jewish state remain strained over the death of nine Turks in a deadly May 31 Israeli raid on a flotilla of aid ships trying to break the blockade on the Gaza Strip.
In August, amid Western concerns of rapprochement between the two countries, Turkey removed Iran from a watch-list of nations it considers a specific threat to its national security.
In September, Erdogan called for closer economic ties with Iran and the two neighbours aim to boost bilateral trade, currently at about 10 billion dollars, to 30 billion dollars between 2013 and 2015.
Iran is reportedly seeking to expand its trade ties with Turkey in a bid to reduce the role of its major trade partner United Arab Emirates, which has imposed banking restrictions on Iran following the last round of UN sanctions in June.
Oil-rich Iran has also been eyeing energy deals with Turkey and in July it signed a 1.3 billion-dollar contract with a Turkish firm to build a pipeline for gas exports of 60 million cubic metres (2.1 billion cubic feet) a day in three years.
Turkey already receives between 15 and 18 million cubic metres (between 525 and 630 million cubic feet) of gas a day through an existing pipeline which runs from the northwestern Iranian city of Tabriz to Ankara.
In another sign of warm relations between Tehran and Ankara, last Thursday Erdogan attended the Shiite mourning festival of Ashura in Istanbul along with Ali Akbar Velayati, a top foreign policy advisor to Iran's supreme leader Ayatollah Ali Khamenei.
Observers saw it as a significant gesture by Erdogan in secular Turkey, where Shiites count for less than 20% of the predominantly Sunni population.
TEHRAN, (AFP)