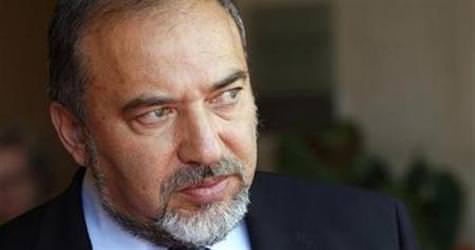 Israel's ultranationalist foreign minister on Sunday dismissed as "chutzpah" a Turkish offer to restore ties if Israel apologizes for a deadly raid on a Gaza-bound ship, saying it was up to Ankara to make amends.

Israeli Prime Minister Benjamin Netanyahu quickly disavowed the remarks, which included a panning of U.S.-mediated peace efforts with the Palestinians, saying Foreign Minister Avigdor Lieberman was speaking only for himself.

"I think the matter of an apology borders on chutzpah or beyond," Lieberman told Israeli diplomats in a speech attended international media. "If anything, we are waiting for an apology from the Turkish government, and not the other way around."

Lieberman was responding to a Turkish demand, reiterated by Foreign Minister Ahmet Davutoglu on Saturday, that Israel apologize and offer compensation for its marines' killing of nine Turks in clashes aboard the Mavi Marmara aid ship in May.

The incident, following months of Turkish censure of Israeli policies toward the Palestinians, ruptured ties between the Jewish state and its once-stalwart Muslim ally and NATO power.

Envoys of the two countries held rapprochement talks in Geneva this month. Israeli officials say they broached a deal that would entail them expressing "regret" for the ship violence and paying damages to those bereaved or hurt, in return for a Turkish commitment to indemnify navy personnel against lawsuits.

A formal Israeli apology would only serve to fuel such legal actions, Lieberman's deputy, Danny Ayalon, has said.

Lieberman and Ayalon hail from an ultranationalist party that is the often fractious junior coalition partner to Netanyahu's right-wing Likud.

Political sources say Netanyahu sometimes excludes Lieberman from more sensitive policymaking and sent one of his confidants to team up with the Israeli diplomat handling the Geneva talks.

Netanyahu distanced himself from Lieberman's speech. "The foreign minister's remarks reflect his own preparations and positions," Netanyahu's office said in a statement.

"The Israeli government's position is exclusively that voiced by Prime Minister Benjamin Netanyahu and manifested by cabinet resolutions."

"The fact that we have the will to make peace does not mean that others also have that will. Then this creates difficulty. It is very difficult to establish political will in Israel."

Davutoglu noted Turkey's quick dispatch of planes to help Israel battle a forest fire this month, and suggested that, had the situation been reversed, it would have taken "days" for the Israelis to behave likewise.
Lieberman denounced those remarks as "lies," recalling Israel's aid airlift to Turkey after its 1999 earthquake.

But he did acknowledge an Israeli contribution to the collapse of talks with the Palestinians three months ago.

"When you look at all of the components in the coalition, are we capable today of presenting a (peace) plan?" Lieberman asked rhetorically, citing sharp differences among Israeli governing parties over how and whether to meet Palestinian demands for statehood on territory Israel occupied in 1967.

He proposed a "Plan B," a long-term interim accord with the Palestinians, which he said he would be prepared to finalize and present "any time." Lieberman gave no further details.

Israel says its marines opened fire in self-defense aboard the Mavi Marmara, an account disputed by the pro-Palestinian activists they faced. Israel has refused to ease its naval blockade on the Gaza Strip, saying arms shipments could reach the Hamas Islamists against whom it fought a war two years ago.

Lieberman accused the Erdogan government of abetting the Turkish Islamist charity IHH, which sponsored the Mavi Marmara and other ships that tried to breach the blockade. Ankara wants Gaza's borders opened but distanced itself from the IHH mission.

"If anyone should apologize, it should be the Turkish government to Israel over cooperation with terrorist elements, support for terrorism, support for the IHH, Hamas and (Lebanese) Hezbollah. There will be no (Israeli) apology," Lieberman said.

(Additional reporting by Ibon Villelabeitia in Ankara and Jeffrey Heller in Jerusalem; editing by Mark Heinrich)