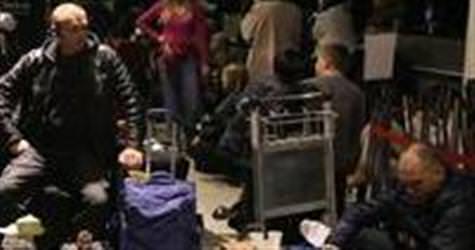 Freezing weather and power outages left over 200 flights delayed at Moscow's Domodedovo and Sheremetyevo over the last three days, with some passengers staging protests in security check areas.

Prosecutors have launched a probe into the massive delays aimed to "protect the rights of passengers," Moscow transportation prosecutor Yevgeny Pospelov told Interfax.

Ironically, the chaos was caused not by a cold snap but unseasonably warm weather which meant that torrential freezing rain, rather than snow, fell at the weekend, leaving a treacherous layer of ice on roads and runways.

Passengers in Domodedovo were suffering from lack of ventilation, irregular water supply in airport bathrooms and power outages, a passenger told Interfax Tuesday.

"People are on the verge of a nervous breakdown," she said, adding that airlines had to call extra security due to passengers' anger.

Power was restored in Domodedovo on Tuesday after a complete shutdown over the weekend caused by a break in powerlines that were weighed down by ice following the freezing rain.

In a rare display of public anger in Russia, a YouTube video from Sheremetyevo showed hundreds of passengers sitting on the floor and banging the blue plastic containers in the security area and chanting "Shame!"

Airport security was seen looking on with bemusement but doing nothing to halt the protest.

Sheremetyevo director Mikhail Vasilenko blamed the weather for disruption, saying the ice increased the time to de-ice the planes from 20 minutes to 1.5 hours, he said on his blog on Monday.

But angry commentators said the airport was at fault for not providing a boarding ramp to paramedics for over an hour when an ambulance was called for a little girl with a heart condition.

"If we were in the US, you would be sued while the rest (of the airport) staff burned on a pile of trash without even a lawsuit!" blogger Sergey Chaplygin wrote to Vasilenko after describing the incident.