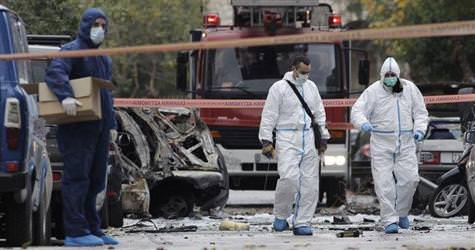 A powerful bomb hidden on a parked motorcycle exploded outside two court buildings in central Athens and a small bomb went off outside the Greek embassy in Buenos Aires, Argentina, but neither caused injuries, officials said Thursday.

A powerful bomb hidden on a parked motorcycle exploded outside two court buildings in central Athens and a small bomb went off outside the Greek embassy in Buenos Aires, Argentina, but neither caused injuries, officials said Thursday.
The rush-hour blast in Athens occurred at 8:20 a.m. (0620 GMT) following a warning telephone call to a newspaper and private TV station, authorities said. Police had evacuated the targeted buildings, which are used for administrative purposes, as well as a nearby private hospital.

The blast damaged cars and shattered windows, but state health officials confirmed that no one was injured.

Separately, a small bomb that exploded outside the Greek embassy in Buenos Aires caused minimal damage overnight and no one was at the embassy, Foreign Ministry spokesman Grigoris Delavekouras told the AP.

There was no immediate claim of responsibility for either bombing, but suspicion fell on militant anarchist groups, which have stepped up attacks in the past two years. A group of suspects is facing trial in Athens next month.

Authorities in Europe and elsewhere say violent anarchist groups are showing greater international coordination. A violent Italian anarchist group carried out a string of embassy bombings in the past week in solidarity with jailed Greek militants.

Security has been increased at all Greek embassies since the attacks, Delavekouras said.

The caller who provided the warning in the Athens bombing was described as a man speaking clearly in Greek. The blast occurred in a densely populated area in the city's Ambelokipi district, shattering windows and nearby shop storefronts in a 200-meter (yard) radius, and seriously damaging at least 10 cars. It sent up a cloud of smoke that was visible across the city.

Police said the bomb was stored in a hard luggage case in the back of a motorcycle reported stolen in a nearby area of Athens several hours earlier.

An initial examination of the site, suggested that the explosive Anfo - a mixture of ammonium nitrate and fuel oil used in construction but also in improvised explosive devices - was used, police investigators said. The material has been used in the past by Greek terror groups and seized in police raids in recent months on suspected militant safehouses.

"The government strongly condemns any action, that without an moral or popular legitimacy, attempts to challenge our democracy and terrorize the citizens," government spokesman Giorgos Petalotis said.

"The authorities remain alert and prepared to deal with these incidents."

Attacks by far-left and anarchist militant groups jumped by 43 percent in 2009 in the European Union compared to the previous year, according to the EU police agency, Europol, with most of the incidents in Italy, Spain and Greece.

Court buildings and senior officials have been targeted several times in the past in terror attacks. In the wake of Thursday's blast, the Greek Court Employees Association called for increased police security at court buildings.

At least a dozen suspected members of the violent anarchist group calling itself Conspiracy Nuclei of Fire are due to go on trial on Jan. 17. The group also claimed responsibility for a spate of parcel bomb attacks targeting embassies in Athens and other sites in November.