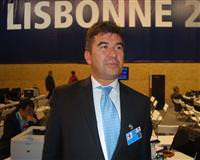 Turkey, which has thus-far acted as representatives for a number of international organizations, now aims to add the Organization for Security and Cooperation in Europe to that list, by nominating Ambassador Ersin Erçin as Secretary-General for the 56–nation member organization.

This year, Turkey is hoping to add the OSCE to the number of international organizations they have acted as representatives for in the past. The OSCE, which has traditional selected secretary generals from EU nations, is hoping to expand to both the East and the West with an ideal representative from Turkey. Turkey's nominee, Ersin Erçin, currently acting as Ambassador to Brazil, is expected to receive support from the European Union. The first extension of said support came from Greek Prime Minister George Papandreou. Thus far, no one else has been nominated for the position; however speculation has arisen that Austria's former Minister of Foreign Affairs Ursula Plassnik may also be a candidate for the role. However, as Austria is acting as host for the OSCE, it is not deemed usual practice for the host country to suggest a candidate.

Up until now, the OSCE has appointed four Secretary General's, and all from EU nations, namely from Germany, Italy, Slovakia and France. Ankara has high expectations however that the EU will offer support for Turkey's candidate. Ambassador Ersin has already been welcomed in the international arena and will most likely receive support for the takeover of France's Marc Perrin de Brichambaut's current position. With President Abdullah Gül's support, Erçin has already been named as a Special Representative for European Security, and was introduced to almost 40 state and government leaders by the president himself.