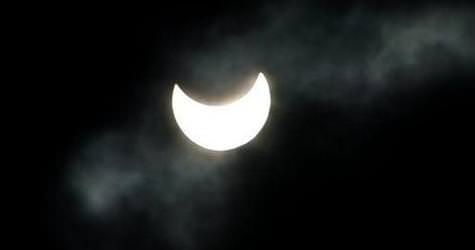 Europe was given a front-row seat on Tuesday to the first solar eclipse of 2011 only to find that in many places a thick curtain of cloud marred the spectacle.

In London, Paris and Rome, hopes for a spooky darkening of the winter skies at sunrise were dashed by dense cloud which turned the event into a grey mush.

"Aaah so much hype of an eclipse... all I saw was the usual British cloud!!!" said Twitter contributor Romana Alli in Britain.

"Finally, I saw the eclipse after all, through a little hole in the clouds over Cologne!" added Henning Krause in Germany's Ruhr Valley. "Pics didn't work out though."

Tuesday's partial eclipse occurred when a fraction of the Moon obscured the Sun, making it seem -- in clear skies -- as if a "bite" had been taken out of the solar face.

In London, Amsterdam, Brussels, Paris and Berlin, between two-thirds and three-quarters of the Sun was covered at the eclipse's peak, beaten though by the Swedish town of Skellefteea, which lies about 200 kilometres south of the Arctic circle.

"The eclipse is going on right now, with more than 80 percent of the Sun being hidden," said Goeran Olofsson, a professor of astronomer at Stockholm observatory, at 0830 GMT.

In the Middle East, the Sun was almost half-obscured when seen from Beirut, Jerusalem and Amman, but more than 60 percent from towns in Turkey, according to calculations by veteran eclipse-watcher Fred Espenak.

A smaller eclipse was to be visible at sunset from central Russia, Kazakhstan, Mongolia and northwest China before the lunar shadow flitted away a few seconds after 1100 GMT.

Eclipse-watchers have an unusually bumper year, according to NASA, which counts two partial solar and two total eclipses in 2011.

The next partial solar eclipse will be on June 1, visible in eastern Siberia, northern China, Alaska and northern Canada.

Total solar eclipses occur when the Sun, Moon and Earth are all perfectly in line.

The Sun is 400 times wider than the Moon, but it is also 400 times farther away, which means the lunar shadow, or umbra, is just wide enough to cover the face of the Sun.

The last total solar eclipse was on July 11, 2010, crossing the Southern Pacific. The next will be on November 13, 2012, crossing parts of Australia, New Zealand, the South Pacific and South America, says Espenak.