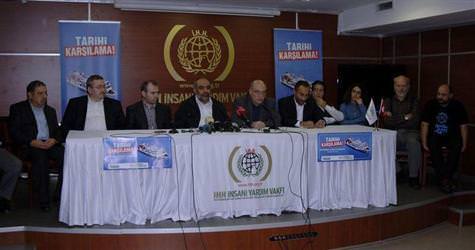 Israel has asked the United States to consider outlawing the Turkish Islamist group behind a flotilla that tried to break Israel's blockade of the Hamas-ruled Gaza Strip in May, Israeli officials said on Wednesday.

Israeli Foreign Minister Avigdor Lieberman requested the outlawing of the IHH, or Foundation for Human Rights and Freedoms and Humanitarian Relief, at a meeting with visiting U.S. Homeland Security Secretary Janet Napolitano on Tuesday.

The IHH is a prominent Turkish charity banned in Israel over its alleged support for Hamas, the Palestinian Islamist movement that appears on Israeli, U.S. and EU terrorist lists.

The IHH describes itself as an aid organization, and organized the Gaza flotilla, which the Israeli navy intercepted, storming one of the ships and killing nine Turkish activists who fought the Israeli marines.

Once-strong ties between Turkey and Israel hit rock-bottom as a result of the incident. Turkey has demanded an apology and compensation, which Israel has refused.

The U.S. embassy in Israel did not immediately return a call for comment on Lieberman's request.

A U.S. diplomatic cable from December 2009 and published by WikiLeaks said a U.S. Treasury official who visited Ankara "raised concerns about IHH" and described it as "a large NGO providing material assistance to Hamas."