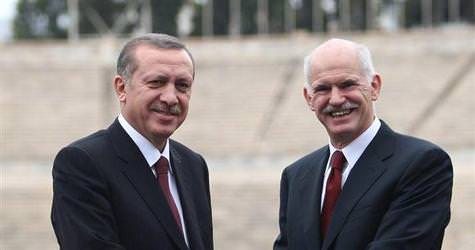 Prime Minister Erdoğan, who will be hosting his Greek counterpart in Erzurum today, will be relaying the following messages to Athens: “From here on out, let’s make the Aegean a sea of peace. With the High Level Strategic Cooperation Council we can activate economic relations.”

As the debate regarding Greece's intentions to build a barrier along the Turkish-Greek border continues with fervor, Prime Minister Recep Tayyip Erdoğan plays host to Greek Prime Minister George Papandreou today in Erzurum. Papandreou will be accompanied on his neighborly visit by Foreign Affairs Minister Dimitris Droutsas. Erdoğan, who will be starting off the day by having breakfast with Papandreou, will then go on to attend the opening of the Erzurum facilities which will host the Winter Universiade. During the breakfast, issues such as the Aegean's continental shelf, and all relating deliberations as well Cyprus, Turkey's EU accession and the fencing to be erected along the border may also be discussed.
During the Ambassadors Conference however Erdoğan will most definitely state that the Aegean should be a 'sea of peace', and will request that it not be remembered for the continental shelf, the 12-miles, dogfights and illegal immigrants.
AN EU THANK YOU TO A NEIGHBOR
Secondly, Erdoğan will strongly underline the significance of the High Level Strategic Cooperation Council established between the Turkish and Greek governments. He will also make an assessment of relations developing within this framework and will request that the council become more effective.
The third message Erdoğan intends to deliver will be regarding increasing foreign trade figures and further developing the business forums developed between Turkey and Greece. In addition, Prime Minister Erdoğan will also express his gratitude towards Greece for their support with Turkey's EU negotiations.
180 AMBASSADORS TO BE ADRESSED IN ERZURUM
Both Prime Minister Recep Tayyip Erdoğan and Greek Prime Minister George Papandreou will deliver speeches during the close of the Ambassadors Conference held in Erzurum, in which 180 ambassadors representing Turkey from all over the world will be in attendance.