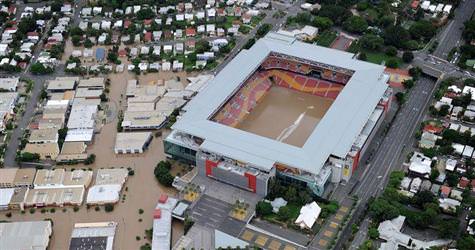 Military aircraft and trucks fanned out across Queensland state, ferrying food and clothing over an area the size of South Africa. The state's capital, Brisbane, a city of two million people, was virtually shut down except for the clean-up.

"The effort that we are concentrating on today is emergency response," Queensland state premier Anna Bligh told Australian television, having described Brisbane as like a war zone.

The floods, which began last month, have crippled infrastructure and crucial coal exports in the mining state, killed at least 19 people, with more than 60 missing.

The national weather bureau warned on Friday that above-average cyclone activity was expected to last until March, with a storm in the Coral Sea being closely watched and threatening to bring more rain.

"There is every chance we will still see above average conditions," a Bureau of Meteorology spokesman said, saying that the cyclone season had made a slow start.

Power has been restored to 170,000 homes in Brisbane, but power company Energex said 66,000 homes across southeast Queensland remained without electricity.

Torrential rain in Victoria state also led to evacuations in Halls Gap and Glenorchy, with a flood peak expected on Friday morning. The town of Beaufort was also under threat with a nearby lake threatening to burst banks, police said.

Similar extreme weather has brought devastation to other parts of the world in recent days with nearly 450 people killed in floods and landslides in Brazil and 23 dead in Sri Lanka.

In the center of Brisbane, a drop in the swollen Brisbane River left foul-smelling mud covering areas beside the city's cultural center and Wheel of Brisbane tourist site.

Bligh called for insurers to show compassion and flexibility, amid reports some residents faced difficulty with payouts against a damage bill expected to top A$5 billion, with $1 billion of that to be underwritten by insurers.

"It's not in the interests of anyone in our community, including those companies, to stall or delay recovery," said Bligh, whose disaster handling has won wide praise, reviving ruling Labor's flagging hopes of re-election in the state.

Bligh said many Queenslanders had taken out insurance believing they were covered for floods and were now discovering they were not protected.

The flooding, which started before Christmas, continued in other areas of Queensland, with the 6,000 residents of Goondiwindi southwest of Brisbane facing a record flood.

Aerial views of Brisbane showed a sea of brown with rooftops poking out, but the water was receding.

Boats have had to be used in many areas to reach houses, with sofas and fridges floating in filthy water, and residents with no idea when they can return.

"Nobody told me this would become this serious, this terrible," said Su Liu, a Chinese student studying marketing at the University of Queensland.

She had fled her house near the riverside university on Tuesday as water poured into the second floor of her apartment building and was sheltering in an evacuation center.
Last Update: Jan 19, 2011 9:21 am
RELATED TOPICS