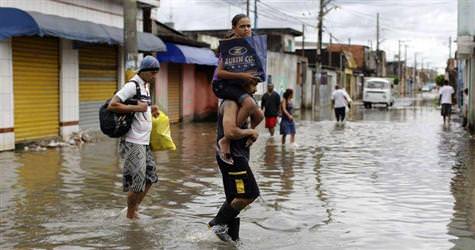 Rescue workers dug for survivors on Thursday and struggled to reach areas cut off by floods and landslides that have killed at least 482 people in one of Brazil's deadliest natural disasters in decades.

Torrents of mud and water set off by heavy rains left a trail of destruction through the mountainous Serrana region near Rio de Janeiro, toppling houses, buckling roads and burying entire families as they slept.

"It's like an earthquake struck some areas," said Jorge Mario, the mayor of Teresopolis, where more than 200 people were killed and scores more are feared to be dead.

"The death toll is going to climb a lot. There are a lot of people buried who can't get help because rescue teams can't get there," Mario said, adding that three of the town's neighborhoods were destroyed by the flooding.

Hillsides and riverbanks in the area, about 60 miles (100 km) north of Rio, collapsed after the equivalent of a month's rain fell in 24 hours from Tuesday night.

The homes of rich and poor alike were swept away in and around Teresopolis and other towns, likely causing billions of dollars in damage. But the brunt of the disaster was borne by poorer rural residents in houses built in risky areas without formal planning permission.

The floods have not affected Brazil's main export crops -- soy, sugar cane, oranges and coffee -- but could push up local food prices further as the small Serrana region is an important producer of fruit and vegetables for the Rio area.

Rio, famed for its beaches and Carnival, will co-host soccer's World Cup in 2014 and host the Olympics in 2016.

Rescuers tried to haul residents from raging floodwaters and went through the ruins of homes in search of survivors, often finding only corpses. One success came when a 6-month-old baby was rescued from the rubble of a house, drawing thunderous cheers from residents.

One woman held a dog in the ruins of her house as powerful waters tore at the remaining walls. She grabbed a rope thrown by residents from a nearby rooftop and eventually was pulled to safety, after dropping the dog into the vicious current.

President Dilma Rousseff, facing her first major challenge since taking office on Jan. 1, called the disaster a tragedy that could not be blamed only on nature.

"Housing in areas of risk is the rule in Brazil rather than the exception," she said in Rio after flying over the flooded region and visiting Nova Friburgo, where much of the damage was done to homes built precariously at the base of steep hills.

"When there aren't housing policies, where are people who earn no more than twice the minimum wage going to live?"

Landslides and flash floods are common in much of Brazil, often exposing poor urban planning and a lack of preventive action by authorities.

Rescue teams had yet to reach several of the worst-hit parts of Teresopolis, including one neighborhood where about 150 houses were believed to have been destroyed.

Dozens of bodies were lined up outside a police station in the city center awaiting identification before being moved to a church, taxi driver Vinicius Bittencourt told Reuters.

"The bodies were there because there is no more space in the morgue," he said. "People are walking in the street crying. I've seen people carrying dead children wrapped in blankets."

At least 39 people also died in Petropolis, a picturesque town nestled in the mountains that served as the summer residence for Brazil's royal family in the 19th century. Another 18 people were killed in nearby Sumidouro.

Firefighters used heavy machinery to remove debris blocking their path to some of the worst-affected areas.

"The situation is critical but we have to advance, we can't stop," said fire department colonel Jose Paulo Miranda.

Rousseff has earmarked 780 million reais ($460 million) in emergency aid for the region. The government said it was sending 210 troops from the National Public Security Force to help identify bodies.

Two navy helicopters are assisting rescue operations and the navy is also sending a mobile field hospital to the area.