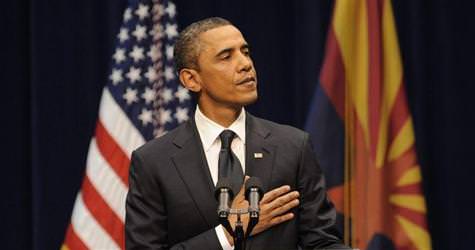 President Barack Obama implored a divided America to honor those attacked in the Arizona shooting rampage by becoming a better country at a Wednesday memorial service, and in a dramatic moment said that Rep. Gabrielle Giffords, who was shot point-blank in the head four days ago, had opened her eyes for the first time shortly after his hospital visit.

Obama electrified the crowd by revealing that following his Wednesday visit with Giffords, the target of an assassination, she "opened her eyes, so I can tell you: She knows we are here, she knows we love her, and she knows that we are rooting for her through what is undoubtedly going to be a difficult journey."

Obama said that there is no way to know what set off Saturday's shooting rampage that left six people dead, 13 others wounded and the nation shaken. He tried instead to leave indelible memories of the people who were gunned down and to rally the country to use the moment as a reflection on America's behavior and compassion.

"I believe we can be better," Obama said to a capacity crowd at the University of Arizona basketball arena -- and to countless others watching across America. "Those who died here, those who saved lives here -- they help me believe. We may not be able to stop all evil in the world, but I know that how we treat one another is entirely up to us."

Obama said Giffords opened her eyes a few minutes after he left her intensive care hospital room Wednesday evening at Tucson's University Medical Center, where some of her colleagues in Congress remained.

"The doctors couldn't believe it," Wasserman Schultz later told CNN. "It was the most incredible experience that I have ever had."

Giffords is expected to survive, although her condition and the extent of her recovery remain in doubt.

As finger-pointing emerged in Washington and beyond over whether harsh political rhetoric played a role in motivating the attack, Obama sought to calm the rhetoric.

"The forces that divide us are not as strong as those that unite us," he said.

Obama's appeal for civility played out against a deepening political debate. Earlier in the day, Republican Sarah Palin, criticized for marking Giffords' district and others with the cross-hairs of a gun sight during last fall's campaign, had taken to Facebook to accuse pundits and journalists of using the attack to incite hatred and violence.

Obama spoke to a crowd of more than 13,000 in the arena and thousands more listened on from an overflow area in the football stadium. Not far away, at University Medical Center, Giffords lay fighting for her life. Other victims also remained hospitalized there.

Obama faced the expectation to do more than console, to encourage civility, all without getting overly political in a memorial service. He challenged Americans to engage in a debate that is worthy of those who died. He tapped into the raging debate about the role of incendiary political speech without dwelling on it.

"Let's remember that it is not because a simple lack of civility caused this tragedy. It did not," the president said.

After offering personal accounts of every person who died, Obama challenged anyone listening to think of how to honor their memories. He admonished against any instinct to point blame or to drift into political pettiness or to latch onto simple explanations that may have no merit.

The president said that Americans should be debating gun control, mental health services and the motivations of the killer, but he pleaded for civility.

"At a time when our discourse has become so sharply polarized -- at a time when we are far too eager to lay the blame for all that ails the world at the feet of those who think differently than we do -- it's important for us to pause for a moment and make sure that we are talking with each other in a way that heals, not a way that wounds," the president said.

The shooting happened Saturday as Giffords, a three-term Democrat who represents southern Arizona, was holding a community outreach event in a Tucson shopping center parking lot Saturday. A gunman shot her in the head and worked his way down the line of people waiting to talk with her, law enforcement officials said. The attack ended when bystanders tackled the man, Jared Lee Loughner, 22, who is in custody.

Obama's speech, by turns somber and hopeful, at times took on the tone of an exuberant pep rally as he heralded the men who wrestled the gunman to the ground, the woman who grabbed the shooter's ammunition, the doctors and nurses who treated the injured, the intern who rushed to Giffords' aid. The crowd erupted in multiple standing ovations as each was singled out for praise. The president ended up speaking for more than half an hour, doubling the expected length of his comments.

Memories of the six people killed dominated much of Obama's speech. The president, for example, recalled how federal Judge John Roll was on his way from attending Mass when he stopped to say hello to Giffords and was gunned down; Dorothy Morris, shielded by her husband, but killed nonetheless; and Phyllis Schneck, a Republican who liked Giffords, a Democrat, and wanted to know her better.

He spoke at length of 9-year-old Christina Taylor Green, the only girl on her baseball team, who often said she wanted to be the first woman to play in the major leagues. She had just been elected to the student council at her elementary school and had an emerging interest in public service.

Obama was again playing the role of national consoler that comes to all presidents and, in rare times, helps define them.

Recent history recalls George W. Bush with a bullhorn amid the rubble of the Sept. 11, 2001, terror attacks; Bill Clinton's leadership after the Oklahoma City bombing in 1995, and Ronald Reagan's response to the explosion of the Space Shuttle Challenger in 1986, when he spoke about being "pained to the core."

Obama drew on his own somber experience, following the shooting rampage by one of the military's own members at the Fort Hood, Texas, Army post in 2009, which left 13 people dead and more than two dozen wounded.

Earlier Wednesday, details of the attacker's activities ahead of the assassination attempt were disclosed. Before the Saturday shooting, Loughner went shopping at a megastore, was pulled over for running a red light and ran from his father after an angry confrontation.

After two shopping trips to Walmart, Loughner ran a red light but was let off with a warning, the Arizona Game and Fish Department said. The officer took Loughner's driver's license and vehicle registration information but found no outstanding warrants and didn't search the car.

Earlier that morning, a mumbling Loughner ran into the desert near his home after his father asked him why he was removing a black bag from the trunk of a family car, sheriff's officials said.

He resurfaced later Saturday at a grocery store where Giffords was holding an event. There, authorities say, he shot 19 people.

In a poetry class, he made comments about abortion, wars and killing people, then asked: "Why don't we just strap bombs to babies?"

Giffords, 40, was less sedated and more responsive and her doctors said that her recovery was going as anticipated.

Back in Washington, Giffords' House colleagues praised her and the other shooting victims and insisted that violence would not silence democracy.