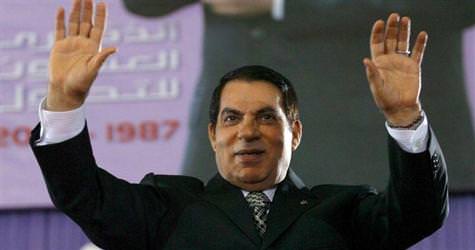 After 23 years of iron-fisted rule, the president of Tunisia was driven from power Friday by violent protests over soaring unemployment and corruption. Virtually unprecedented in modern Arab history, the populist uprising sent an ominous message to authoritarian governments that dominate the region.

The office of Saudi King Abdullah confirmed early Saturday that ousted President Zine El Abidine Ben Ali and his family had landed in Saudi Arabia, after several hours of mystery over his whereabouts. "As a result of the Saudi kingdom's respect for the exceptional circumstances the Tunisian people are going through, and with its wish for peace and security to return to the people of Tunisia, we have welcomed" him, the statement said.

Tunisians buoyant over Ben Ali's ouster faced uncertainly, however, about what's next for the North African nation. The country was under the caretaker leadership of the prime minister who took control, the role of the army in the transition was unknown, and it was uncertain whether Ben Ali's departure would be enough to restore calm.

The ouster followed the country's largest protests in generations and weeks of escalating unrest, sparked by one man's suicide and fueled by social media, cell phones and young people who have seen relatively little benefit from Tunisia's recent economic growth. Thousands of demonstrators from all walks of life rejected Ben Ali's promises of change and mobbed Tunis, the capital, to demand that he leave.

The government said at least 23 people have been killed in the riots, but opposition members put the death toll at more than three times that.

On Friday, police repeatedly clashed with protesters, some of whom climbed onto the entrance roof of the dreaded Interior Ministry, widely believed for years to be a place where the regime's opponents were tortured.

With clouds of tear gas and black smoke drifting over the city's whitewashed buildings, Prime Minister Mohammed Ghannouchi went on state television to announce that he was assuming power in this North African nation known mostly for its wide sandy beaches and ancient ruins.

"I take over the responsibilities temporarily of the leadership of the country at this difficult time to help restore security," Ghannouchi said in a solemn statement on state television. "I promise ... to respect the constitution, to work on reforming economic and social issues with care and to consult with all sides."

The prime minister, a longtime ally of the president, suggested that Ben Ali had willingly handed over control, but the exact circumstances were unclear.

In a string of last-ditch efforts to tamp down the unrest, Ben Ali dissolved the government and promised legislative elections within six months -- a pledge that appeared to open at least the possibility of a new government. Before his removal of power was announced, he declared a state of emergency, including a curfew that was in effect Friday night and was to be lifted at 7 a.m. Saturday.

Isolated bursts of gunfire broke a general quiet in the evening. But overnight, in a sign that Ben Ali's departure hadn't fully restored calm, plainclothes police were seen hustling some people off the streets of Tunis: One was clubbed, another was dragged on the ground.

European tour companies moved thousands of tourists out of the country. Foreign airlines halted service to Tunisia, and said the country's airspace had been temporarily shut down.

Ben Ali's downfall sent a potentially frightening message to autocratic leaders across the Arab world, especially because he did not seem especially vulnerable until very recently.

He managed the economy of his small country of 10 million better than many other Middle Eastern nations grappling with calcified economies and booming young populations. He turned Tunisia into a beach haven for tourists, helping create an area of stability in volatile North Africa. There was a lack of civil rights and little or no freedom of speech, but a better quality of life for many than in neighboring countries such as Algeria and Libya.

Ben Ali had won frequent praise from abroad for presiding over reforms to make the economy more competitive and attract business. Growth last year was at 3.1 percent.

Unemployment, however, was officially measured at 14 percent, and was far higher -- 52 percent -- among the young. Despair among job-seeking young graduates was palpable.

The riots started after an educated but jobless 26-year-old committed suicide in mid-December when police confiscated the fruits and vegetables he was selling without a permit. His desperate act hit a nerve, sparked copycat suicides and focused generalized anger against the regime into a widespread, outright revolt.

The president tried vainly to hold onto power. On Thursday night he went on television to promise not to run for re-election in 2014 and slashed prices on key foods such as sugar, bread and milk.

Protesters gathered peacefully Friday in front of the Interior Ministry, but six hours after the demonstration began hundreds of police with shields and riot gear moved in. Helmeted police fired dozens of rounds of tear gas and kicked and clubbed unarmed protesters -- one of whom cowered on the ground, covering his face.

A few youths were spotted throwing stones, but most demonstrated calmly. Protesters were of all ages and from all walks of life, from students holding sit-ins in the middle of the street to doctors in white coats and black-robed lawyers waving posters.

"A month ago, we didn't believe this uprising was possible," said Beya Mannai, a geology professor at the University of Tunis. "But the people rose up."

"They got the message. The people don't want a dictator." However, she voiced concern for the future because, officially at least, Ben Ali vacated power only temporarily.

"It's ambiguous," she said.

Nejib Chebbi, a founder of the main legal opposition party, said the dramatic developments do not amount to a coup d'etat.

"It's an unannounced resignation," Chebbi said by telephone. To declare a permanent absence of a head of state, such as in a coup, elections would have to be held within 60 days, he said. "So they declare a temporary vacating of power."

U.S. President Barack Obama said he applauded the courage and dignity of protesting Tunisians, and urged all parties to keep calm and avoid violence.

Arabs across the region celebrated news of the Tunisian uprising on Twitter, Facebook and blogs. Thousands of tweets congratulating the Tunisian people flooded the Internet, and many people changed their profile pictures to Tunisian flags.

Egyptian activists opposed to President Hosni Mubarak's three-decade regime looked to the events in Tunisia with hope. About 50 gathered outside the Tunisian Embassy in Cairo to celebrate with singing and dancing. They chanted, "Ben Ali, tell Mubarak a plane is waiting for him, too!"

Meanwhile, the New York-based Committee to Protect Journalists reported that three journalists detained in Tunisia had been released: bloggers Azyz Amamy and Slim Amamou, who were arrested on Jan. 7, and Radio Kalima correspondent Nizar Ben Hasan, who had been taken from his home Tuesday.

CPJ called for the release of journalist Fahem Boukadous, who it said is serving a four-year prison sentence for his coverage of 2008 labor protests.

Earlier Friday, swirling speculation about Ben Ali's location had reached such a fevered pitch that the governments of France and Malta -- just two of several countries where he was speculated to be heading -- put out statements saying they have had no requests to accommodate him.

One French official, speaking on condition of anonymity because of the sensitivity of the matter, said the French government did not want Ben Ali there.

Ghannouchi is a 69-year-old economist who has been prime minister since 1999 and is among the best-known faces of Tunisia's government. He did not say anything about a coup or about the army being in charge.

Ben Ali, 74, came to power in a bloodless palace coup in 1987. He took over from a man formally called President-for-Life -- Habib Bourguiba, the founder of modern-day Tunisia who set the Muslim country on a pro-Western course after independence from France in 1956.

Ben Ali removed Bourguiba from office for "incompetence," saying he had become too old, senile and sick to rule. Ben Ali promised then that his leadership would "open the horizons to a truly democratic and evolved political life."

But after a brief period of reforms, Tunisia's political evolution stopped.

Ben Ali consistently won elections with questionable tallies: In 2009, he was re-elected for a fifth five-year term with 89 percent of the vote -- and that was the lowest official percentage of any of his victories. Before that vote, he had warned opponents they would face legal retaliation if they questioned the election's fairness.

U.S. diplomatic cables released by WikiLeaks have called Tunisia a "police state" and described the corruption there, saying Ben Ali had lost touch with his people. Social networks like Facebook helped spread the comments to the delight of ordinary Tunisians, who have complained about the same issues for years.

There is little precedent in the Arab world for a ruler being ousted by street protests. In Sudan in 1985, a collapsing economy and other grievances sparked a popular uprising, although the government was eventually ousted by a military coup.

The closest parallel in the broader Middle East comes from Iran -- which is not an Arab nation -- where mass demonstrations helped topple the shah and usher in the Islamic Republic in 1979.

Tunisia's giant neighbor Algeria saw huge protests before it was shaken by a military coup in 1992, with a five-man leadership put in place after the army canceled the nation's first multiparty legislative elections, which a Muslim fundamentalist party was poised to win. The party, the Islamic Salvation Front, became a vehicle for popular dissent.

There were also massive demonstrations in Lebanon in 2005, dubbed the "Cedar Revolution," but those were directed against Syrian influence in the country and not the Lebanese government per se. The protests led to the withdrawal of Syrian forces from Lebanon and the resignation of Lebanon's pro-Syrian prime minister and fresh elections.

Al-Qaida's North African offshoot appeared to try to capitalize on the Tunisian unrest, offering its support for protesters this week. There has been no sign of Islamic extremist involvement in the rioting.