Chaos in Tunisia as new president sworn in 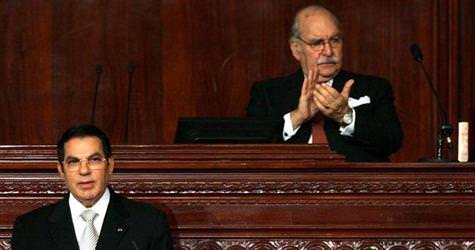 Chaotic scenes were playing out in Tunisia Saturday as a new interim president was sworn in - a day after longtime leader Zine el-Abidine ben Ali fled the country - amidst looters and prisoners running amok.

Foued Mbazaa, the former speaker of parliament, was sworn in as interim president on the orders of the constitutional council, which declared that Ben Ali had 'definitively' left power after 23 years.

He has 60 days to organize new elections.

As he was being sworn in, the army and police were battling to restore order.

A prison, in the central town of Kasserine, was in flames and prisoners were on the run after taking advantage of the power vacuum to stage a breakout, eyewitnesses said Saturday afternoon.

There was no information yet on injuries or fatalities.

That breakout followed a strike for freedom earlier at a prison in the coastal city of Monastir. That attempt ended in tragedy, with upwards of 50 people reported killed when the prison caught fire, medical sources and eyewitnesses said.

The blaze apparently started when prison inmates began setting their mattresses on fire. Then, according to eyewitness accounts, several prisoners seeking to escape were shot dead by prison guards.

Tunisia has been under a state of emergency since Friday.

Mbazaa's inauguration restores constitutional order in Tunisia. Prime Minister Mohamed Ghannouchi had caused surprise by declaring Friday, after Ben Ali left, he would take over the reins of power.

The constitution says the speaker of parliament, not the prime minister, takes over if the country is left without a president.

His departure was celebrated in the country of 10 million, where he had stifled dissent and his administration was seen as deeply corrupt.

Saudi officials welcomed Ben Ali and his family, while also wishing 'security and stability' to the people of Tunisia, the SPA news agency reported.

According to French media, Ben Ali opted to travel to Saudi Arabia after he was denied the right to land in France, the former colonial power in Tunisia.

It was not clear whether Ben Ali was forced to leave or had done so of his own accord.

In Tunis, several supermarkets and residential buildings were set ablaze or looted and one hospital was attacked, reports said. Several of the targeted buildings were owned by relatives of Ben Ali.

The Tunisian military tried to reassert control, with troops marching through the centre of Tunis and helicopters circling through columns of smoke wafting up from the rubble.

Hundreds of European holidaymakers have fled the country. German tour operators cancelled all flights to Tunisia. However, many other European tourists remain stranded in the country.

Ben Ali, a 74-year-old former interior minister, had been president since 1987, replacing self-styled 'president for life' Habib Bourguiba when he was deposed in a coup.