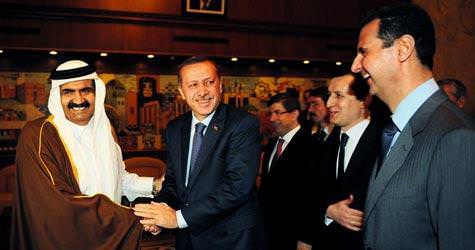 The leaders of Syria, Turkey and Qatar on Monday threw their weight behind mediation by Damascus and Riyadh to resolve the political crisis in Lebanon, the Syrian news agency SANA reported.

The three leaders "expressed their commitment to a solution to the Lebanese crisis based on Syrian-Saudi good offices so as to achieve understanding between the Lebanese and avoid a deterioration of the situation," it said.

Lebanon's coalition government collapsed last Wednesday when the Shiite movement Hezbollah and its allies withdrew their ministers in anticipation of being indicted for the killing.

SANA said the leaders also welcomed the postponement of talks on appointing a new prime minister in Lebanon as a means "to allow political efforts underway to help the Lebanese find a solution."

Hezbollah chief Hassan Nasrallah has said he believes indictments would implicate members of his party and has accused the UN-backed Hariri tribunal of being part of a US-Israeli plot.

Rival political factions in Lebanon have been locked in a power struggle to replace Saad Hariri, son of Rafiq, as prime minister. Last week, diplomats in New York said Riyadh and Damascus had given up their mediation efforts.