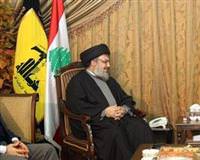 While in Lebanon in order assist in reaching a solution to the government crisis, Foreign Affairs Minister Ahmet Davutoğlu met with Hezbollah leader Hassan Nasrallah.

During an announcement regarding the meeting, Davutoğlu stated that they met in a known location. Davutoğlu also noted that during the meeting they discussed the importance of establishing peace and security.
Ahmet Davutoğlu also emphasized that this period of political crisis in Lebanon must be resolved to result in a peaceful state.
Minister of Foreign Affairs Davutoğlu also underlined the fact the he placed much importance on all sides coming together in the spirit of national unity.
Ahmet Davutoğu also added that during his meeting with Hassan Nasrallah they also discussed the significance of indictments by the international court.