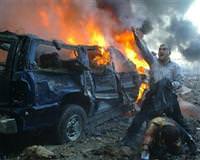 Saudi Arabia said on Wednesday it had abandoned mediation efforts in Lebanon between Shi'ite Hezbollah and Sunni leader Saad al-Hariri over the killing of his father and warned that the country's future was at stake.

Regional power Saudi Arabia and Syria had worked for months to resolve a dispute between Hezbollah and Hariri over indictments in the 2005 killing of former prime minister Rafik al-Hariri, which are widely expected to accuse Hezbollah members.
Saudi Foreign Minister Prince Saud al-Faisal said the kingdom had abandoned its efforts and that the situation in Lebanon was "dangerous".
"If the situation reaches separation or partition of Lebanon, this means the end of Lebanon as a state that has this model of peaceful cohabitation between religions and ethnicities and different groups," he told Al Arabiya television.
"It would be a loss for the whole Arab nation".
Despite the declared withdrawal by Saudi Arabia, a powerful regional player and close supporter of Hariri, other countries were continuing efforts to find compromise.
Analysts however say no compromise or breakthrough could happen without backing from Saudi Arabia, a close U.S. ally.
Ministers from Qatar and Turkey were holding a second day of talks in Beirut, after meeting Hariri and Hezbollah Secretary-General Sayyed Hassan Nasrallah on Tuesday.
"(Saudi Arabia is saying) it is not part of the negotiation process lead by Turkey and Qatar," Okab Sakr, a parliamentarian close to Hariri told Reuters. "Because its efforts collided with obstacles (inside Lebanon). So they are saying let the Turkish and the Qataris do (what they can) and it supports any efforts aimed at protecting Lebanon." Turkey, fast emerging as a regional force with links to the Europeans, Americans and even the Israelis, may play a neutral, moderating role alongside Qatar, a wealthy gas-exporting Gulf state trying to punch above its diplomatic weight.
Hezbollah ministers and their allies brought down Hariri's government last week, saying his rejection of their demands to cut Lebanon's links to the U.N.-backed tribunal which issued the indictment on Monday had thwarted the Saudi and Syrian efforts.
Hezbollah, which is backed by Iran and Syria, denies any role in the 2005 killing and has said it will not allow any of its members to be handed over to the tribunal.
SECURITY, ECONOMY WORRIES
Hezbollah and its allies have said they would treat the political deadlock differently once the indictment was released, suggesting they would take a tougher stance after it was issued.
Fears that Hezbollah might repeat moves in May 2008, when gunmen took over parts of West Beirut, were raised on Tuesday by the deployment of black-clad groups of men across the capital.
"We think that the situation is in a very dangerous stage and the country is heading towards (problems) on the streets which means dividing the country," Sakr said.
Finance Minister Raya Hassan said a protracted political deadlock or a "security crisis" would hurt the economy, and the cost of insuring Lebanon's debt against restructuring or default rose sharply on Wednesday to its highest since May 2009.
Lebanon's five-year credit default swaps rose 13 basis points to 330 points, according to Markit, a day after Standard & Poor's ratings agency cut the country's outlook.
Hilal Khashan, a political science professor at the American University of Beirut, said there was little chance of breakthrough because positions remained entrenched.
"It will not lead to anything because Hariri will not change his mind. It is all a waste of time," he said. "Last week (the mediation) collapsed, so what would make it work this week?".
Last Update: Jan 20, 2011 10:10 am
RELATED TOPICS