EU in talks with Greece on continued Frontex help 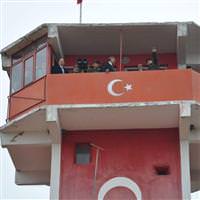 The situation on Greece's border with Turkey, hit by massive immigration, remains fragile and the EU is discussing with Greece how the bloc's special Frontex patrols could continue to help the country.

Stefano Manservisi, head of the directorate general for home affairs in the EU, also said the Greek authorities had not yet started building a planned fence at the border to prevent immigrants from flowing into the country.
The U.N. refugee agency and rights groups have condemned the proposed 12.5 km (7.8 mile) fence, saying it will shut out asylum-seekers fleeing violence and warning that more migrants may die trying to reach Greece via more dangerous routes.
Asian and African migrants increasingly use the northern Greece Evros border with Turkey to reach the EU, after the bloc stepped up surveillance at its sea borders and Spain and Italy signed repatriation deals with African countries.
Manservisi said it was the sovereign decision of each member state to choose the means of protecting the external border of the EU, provided that they respected EU laws and in this case the Schengen border code.
"There are many fences in the external border of the union so it would not be the first one," Manservisi told Reuters on the sidelines of a ministerial meeting in Godollo, on the eastern outskirts of the capital of Hungary, which holds the EU's rotating presidency.
"What we said very clearly and the Greek authorities fully agreed is that nobody should believe that adding a fence to a complex border which is now hit by a massive flow of migrants will solve the problem," he said, adding the situation remained fragile.
He also said the EU was discussing with Greek authorities continued support from the bloc after the mandate of EU border agency Frontex's RABITs force -- shorthand for "Rapid Border Intervention Teams" -- ends in early March.
"We are discussing now with the Greek authorities and with Frontex how to organise the post-RABIT in order to have a longer period, let's say another strong operation which keeps supporting effort on the Greek side," he said.
In the first nine months of 2010, illegal migration increased by more than 350 percent at Greece's northern border, according to Frontex.