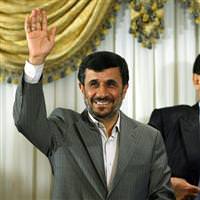 Iran hopes to resume talks with world powers on its nuclear program, President Mahmoud Ahmadinejad said on Sunday, a day after discussions ended in stalemate with no clear agreement to meet again

"If the other party is determined and committed to law, justice and respect, there is hope that in the next sessions good results would be achieved," Ahmadinejad said in a speech.

Two days of talks with the United States, France, Germany, China, Russia and Britain ended without progress on Saturday with the group's lead negotiator, the European Union's Catherine Ashton, saying no further meeting was scheduled.

Ahmadinejad spoke as if it were understood the talks would resume. "In the upcoming meetings there will be good agreements made, provided the two parties remain committed to the spirit of the talks," he said in the televised speech to a crowd in the city of Rasht.

He blamed Israel and its allies in the West for the lack of progress. "Uncultured Zionists and some people in America and Europe are hopeful the issues remain unresolved," he said.

The talks, held in the Turkish city of Istanbul, were meant to address Iran's dispute with countries that fear it may be developing nuclear weapons.

Tehran says its nuclear program is peaceful and has ignored U.N. Security Council resolutions demanding it suspend uranium enrichment, the process that can make fuel for atomic power plants or, if done to a very high level, the fissile core of a nuclear bomb.

The prospect of an Iranian atom bomb fans fears of a broader Middle East conflict should the United States or Israel decide to attack Iran, a possible last-ditch option if diplomacy were to fail.

Ashton, the EU foreign policy chief, said after the Istanbul talks: "The process can go forward if Iran chooses to respond positively ... The door remains open. The choice remains in Iran's hands."

The powers may be unwilling to rush back to talks without any prospect of agreement, especially since many diplomats say it is in Iran's interests to drag out negotiations while it increases its stockpile of enriched uranium.

Iran says the other countries must respect its "nuclear rights" and its enrichment activities are not negotiable. It calls sanctions, which were tightened last year, illegal and Ahmadinejad said Iran would not give in to "bullying".

Shannon Kile, an Iran expert at the Stockholm International Peace Research Institute, said there were few prospects of progress if Iran stuck to its positions on refusing to curb its atomic activities and that sanctions must be lifted.

"It looks like it is basically off the rails now," he said. "The discussions about the future scope and trajectory of Iran's enrichment program are basically at a deadlock."

Mark Fitzpatrick, a former senior U.S. State Department official now at the International Institute for Strategic Studies think-tank, said he did not believe this was the end of diplomatic efforts to try to resolve the dispute.

"I don't think (Iranian nuclear negotiator Saeed) Jalili was in any position to be able to show any flexibility," he said, referring to ideas put forward by Ashton at the meeting.

"They (Iran's leaders) will have to study it and meanwhile the Iranian position will be further hindered by additional sanctions, not by the United Nations but by states acting individually."