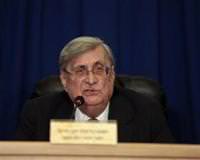 An Israeli inquiry cleared the government and military on Sunday of wrongdoing in the bloody seizure of a Turkish aid ship that tried to breach the Gaza blockade, provoking an angry response from Ankara.

The Turkel Commission, whose report will form the core of Israel's submission to a U.N. investigation into the May 31 incident, endorsed the sea closure but called for reviews by Israel of how to direct its sanctions at Gaza's Hamas rulers and spare civilians.

"By clearly resisting capture, the Mavi Marmara had become a military objective," the commission said in a 245-page report, referring to the converted cruise ship which Israeli marines boarded on the high seas after it ignored orders to turn away.

Nine Turks were shot dead in the clash. The commission accused the IHH, a Turkish Islamist charity that owned the Mavi Marmara, "of planned and extremely violent" resistance which was "directly connected to the ongoing international armed conflict between Israel and Hamas."

Turkey said on Sunday it was "appalled and dismayed" at the commission's findings.

It said its own panel's report on the incident, which it submitted to the U.N. inquiry in September, had found Israel's blockade of the Gaza Strip and its raid on the aid convoy had violated international laws.

Turkey, a predominantly Muslim former ally of the Jewish state, has scaled back ties demanding Israel apologize and pay damages for the raid, which caused an international outcry.

Israel has broached compensation but refused to admit fault.

Israel had boycotted that panel, calling it biased, but is cooperating with a separate investigation set up by U.N. Secretary General Ban Ki-moon and still under way.

The Israeli commission said the Gaza blockade was justified given the threat of gun-running to Hamas and Israel's efforts to maintain humanitarian supplies to ordinary Palestinians there.

"Even if the naval blockade ... had been considered not to meet the requirements of international law, individuals or groups do not have the right to take the law into their own hands and breach the blockade," the report said.

Marines who stormed the Mavi Marmara by helicopter and motor boat used sound tactics, resorting to gunfire when passengers threatened their lives, it said, echoing the conclusions of an Israeli military inquiry from July.

Commenting on the findings, Israeli Prime Minister Benjamin Netanyahu said he hoped those who were quick to judge Israel and its forces unfavourably "will read this report, and learn the truth about the events."

Drawing on video from marines' helmet-mounted cameras and confiscated from passengers, as well as witness testimonies and Israeli intelligence briefings, the commission examined 133 instances in which the boarding party used force.

In 127 of the cases, marines responded appropriately to passengers who attacked them, said former Israeli Supreme Court Justice Jacob Turkel, the panel chairman. The other six cases -- three of which involved gunfire -- were inconclusive.

About 100 of some 600 passengers put up a fight and should therefore not be considered civilians but "direct participants in hostilities" whom marines could legally regard as combatants, the commission said.

Footage showed some of the passengers pummelling, clubbing and stabbing marines and the Israelis have said guns were also used against them -- an account disputed by activists.

The commission heard testimony from Israeli Arabs who had been passengers on the Mavi Marmara, but its call for Turkish and other foreign witnesses to come forward was largely ignored.

Marines who participated in the raid did not testify and their accounts were relayed by senior officers. The commission also questioned Israeli top brass, Defense Minister Ehud Barak and Netanyahu in a series of hearings.