‘Turkey is the world’s rising power’ 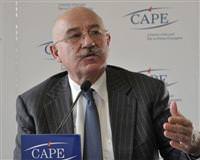 EU Term President Hungary’s Foreign Affairs Minister Janos Matonyi spoke to SABAH. “The EU will be in a much better position with Turkey. Turkey’s membership would work to Europe’s advantage.”

In an exclusive interview with SABAH, the first for the new EU Term President as of January 1st, Hungary's Minister of Foreign Affairs Janos Martonyi stated, "Turkey is the world's rising power. Those countries who have concerns about Turkey should ask themselves this question. 'Would you prefer for Turkey to be within Europe or outside? In my opinion, a European Union with Turkey would make Europe stronger in a global perspective."
We witness a series front in the EU, with Germany and France in the forefront, that is against Turkey's EU membership. As Term President, what is your stance?
There are two strategic questions in front of the EU that need to be answered internationally: When we take religious, cultural and historical relations into perspective, "EU-Russian relations" and "EU-Turkish relations."
I don't perceive Turkey, which has begun the EU negotiation process, the same way I see Russia. However, those that are against Turkey's membership need to answer the question, 'Would you prefer for Turkey to be within Europe or outside?" My answer to this question is this; it is to Europe's advantage for Turkey to be 'within' the union. It is much better for Europe for Turkey to be included. It may take time, but at least for now, all 27 nations are unanimous in regards to the need for negotiations to continue. However, I can promise you that for me, my government and my country, we will always maintain the same stance for Turkey. We will always continue our support.
When did you become aware of Turkey's importance?
I came to this realization two years ago. Two years ago, about 40-50 foreign Ministers came to Ankara on an unofficial trip. It was there that I listened to some really interesting talks on Turkey's foreign policy and geopolitical role. At that point, I understood that Turkey was truly a very important country and would rise to become one of the world's central actors. Even now, this has partially been realized. In 2010, Turkey's economic growth was at eight percent. Each year, Turkey gets stronger, and economic-wise more advanced. The strong military, especially in terms of the nation's positioning is incredibly significant. It is a bridge between us and the Islamic world. A number of factors all point in the same direction! Turkey is a very important world player.
A short while ago, you stated that if Turkey is left outside of the European Union, then the Ottoman Empire may fruition again.
I am not the only one to use the Ottoman example; the media has also used the term. They call the Turks, 'Neo-Ottomans'. We sometimes use certain words in order to better get our point across. If you want call it Ottoman or if you like, 'Neo-Ottoman.' We are witnessing a global competition throughout the world. I don't see it in the next 25-30 years, but then again I happen to think the EU would be in a much better position with such a rising power as Turkey. But of course, if membership is not presented within a logical framework, then it would be quite normal for Turkey to evaluate other options.

Paraguayan and Uruguayan nationals can enter Europe without a visa, don't you think the difficulties for Turks to get visas is discrimination?
I know Turkey is very unhappy about this situation. Every time I speak with my Turkish counterparts, they bring up the visa issue. Let's not forget, in order for an agreement to be reached on the issue, 27 nations need to be in favor. For every important issue a consensus needs to be met. I cannot promise that we will solve this issue, but you can be sure that we will try to.