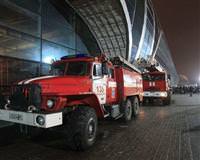 There was no immediate claim of responsibility for Monday's attack at Moscow's Domodedovo airport; but the action bore many of the hallmarks of militants fighting for an Islamist state in the North Caucasus region, on Russia's southern frontiers.

"Taxi drivers lined up in the arrivals hall were blown up. Pieces of their bodies covered us," Artyom Zhilenkov, 30, told Reuters as he pointed to pieces of human flesh on his coat.

North Caucasus rebels have threatened attacks against cities and economic targets in the run-up to parliamentary elections this year and 2012 presidential polls. But the choice of Domodedovo, resulting in the deaths of several foreigners, suggested the attackers, whoever they were, sought to raise uncertainty beyond Russia's borders.

Russia is due to host the 2014 Winter Olympics in Sochi, which some Islamist rebels consider "Russian occupied" territory, and the 2018 soccer World Cup.

President Dmitry Medvedev said he would track down and punish those behind the bombing, which also injured over 150 people arriving in Moscow on a busy late afternoon. He ordered increased security at transport hubs and public meeting places.

Prime Minister Vladimir Putin, the more powerful in Russia's 'tandem' political leadership, built his early reputation as a strong leader by launching a war in late 1999 to crush a rebel government in the Northern Caucasus's Chechnya region. That campaign achieved its immediate aim, but since then, insurgency has spread to neighboring Ingushetia and Dagestan.

It has also assumed a more ruthless edge, spawning hardline factions difficult to monitor. Putin and Medvedev have said they would crush the rebel movements, but their control in the region has sometimes looked tenuous.

"These would likely (but not necessarily) be Islamists from the Northern Caucasus. If so, yet another example of the proposition that success in Chechnya has generated a more diffuse and dangerous threat," said Neil MacFarlane, Professor of International Relations, St. Anne's College, Oxford.

"The consequences? More abuse of people of Caucasian origin in Moscow and elsewhere in Russia...more intense military/police response in the region will make the problem more severe rather than less, because of the methods that are likely to be employed, and the obligation to revenge."

The spread of violence from the North Caucasus, where it is fed by a cocktail of corruption, poverty and clan rivalries as well as religious radicalism, fans Russian nationalist militancy in the heartland.

Tensions between ethnic Russians and the 20 million Muslims who make up one seventh of Russia's population flared dramatically last month in a string of clashes, which involved thousands of Russian nationalists who attacked passersby of non-Slavic appearance, many of them from the North Caucasus.

The incidents caused alarm in the Kremlin.

Analysts said such attacks, if sustained, could raise doubts over foreign involvement in the Russian economy, though there were no signs of any serious reaction in Russian markets to Monday's attack.

The prosecutor's office said the attack, the largest since twin suicide bombings on the Moscow metro rocked the Russian heartland in March, "was most likely carried out by a suicide bomber." State television attributed it to a "smertnik," or suicide bomber.

Moscow suffered its worst attack in six years in March 2010 when two female suicide bombers from Dagestan set off explosives in the metro, killing 40 people.

The worst incident involving North Caucasus rebels took place in 2004 when militants seized control of a school in Beslan. When Russian troops stormed the building in an attempt to end a siege, 331 hostages, half of them children, were killed.