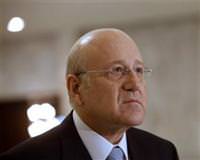 Hundreds of angry protesters burned tyres and blocked roads across Lebanon on Tuesday after a Hezbollah-backed politician was named prime minister, shifting the balance of power in the country toward Syria and Iran.

The nomination of Najib Mikati is seen as a victory for Hezbollah, which is trying to fend off a U.N.-backed tribunal set up in 2009 to try the killers of statesman Rafik al-Hariri and which is expected to accuse members of the Shi'ite group.

Sunni Muslims loyal to outgoing premier Saad al-Hariri, Rafik's son who has Western and Saudi backing, staged a "day of rage" to protest the appointment of the Sunni billionaire Mikati, a centrist lawmaker with ties to Saudi Arabia and Syria.

Hezbollah's enhanced political strength will set off alarm bells in Washington and across the region, especially in Israel which in 2006 fought a five-week war in a failed attempt to destroy the Iran-backed movement's formidable military capacity.

Israeli officials have since threatened regularly to respond to Hezbollah's arsenal of rockets in Lebanon, upgraded with help from Syria and Iran.

U.S. Secretary of State Hillary Clinton said on Tuesday that the emergence of a Hezbollah-led government would "clearly have an impact" on U.S. relations with Lebanon.

The White House accused Hezbollah, which is on a U.S. blacklist of terrorist groups, of using "coercion, intimidation and threats of violence" to achieve its political goals.

Mikati, a telecoms tycoon who has portrayed himself as a consensus candidate, said he would start talks to form a government on Thursday and appealed to all Lebanese factions to overcome their differences.

"All Lebanese leaders should cooperate together to face the current challenges," he said from the presidential palace after he accepted his nomination by President Michel Suleiman.

"I reiterate my position ... that my hand is extended to all factions to take part and end division...through dialogue."

Hezbollah and its allies quit Hariri's government this month in a dispute over the U.N.-backed tribunal, which issued confidential indictments last week that are widely expected to implicate Hezbollah members in Hariri's assassination, a charge the Shi'ite group denies.

"We have supported the nomination of ... Mikati and we call on him to form a national partnership government. The Lebanese have a chance to close ranks," he told thousands of supporters.

Nasrallah said Mikati was not the Shi'ite group's candidate, but it had backed him as a compromise figure.

Hezbollah and its allies did not "want to break bones with the other side ... (nor) form a one-sided government," he said.

Nasrallah's priority is for Lebanon to repudiate the tribunal. France said it was important that the new government was formed "free from interference and through dialogue."

"We urge the incoming government to respect international commitments made by Lebanon, and particularly for the Special Tribunal for Lebanon," French foreign Ministry spokesman Bernard Valero said.

Hezbollah's role in bringing down Hariri's government will also raise concerns in Sunni Arab states, wary of Iran's influence in the region.

Hezbollah and its allies shifted the power in Lebanon legally and constitutionally, winning support for Mikati from 68 of parliament's 128 members after Druze leader Walid Jumblatt, once a Hariri ally, switched sides.

But in Lebanon's tortuous politics, parliamentary majority may be less important than securing sectarian consensus.

"If most of the Sunni community doesn't accept Mikati's designation, we have a problem," said Hilal Khashan, political science professor at the American University of Beirut (AUB).

Habib Malik, a university professor, said the main concern for the Lebanese was how to avoid any fallout from the tribunal that may "cause or precipitate internal fighting.

Okab Sakr, a member of parliament close to Hariri, said that Mikati "might have won the parliamentarian majority but he has lost the legitimacy of co-existence."

The biggest protest took place in the northern city of Tripoli where medical sources said 20 people were treated for injuries and protesters set fire to a satellite truck used by the Arab television channel Al Jazeera.

Hariri appealed for calm, saying he rejected demonstrations of violence. "This anger should not lead us to what disagrees with our values ... our belief that democracy is our refuge," he told supporters in a televised speech.

In Beirut, protesters blocked a road with burning tyres and overturned garbage containers. A security source said shots were fired in the air and the army intervened, but no one was hurt.

Lebanon's power-sharing political system calls for the post of prime minister to be held by a Sunni, and Hariri supporters said any figure who accepted the nomination from the Shi'ite group to form a new government would be considered a traitor.

Hariri supporter Mustafa Alloush told the crowd in Tripoli on Tuesday that the overthrow of the government two weeks ago was part of an Iranian takeover. "It's an attempt to bring Lebanon into the Persian sphere. We will not accept that, and we will be on alert for them," he said.