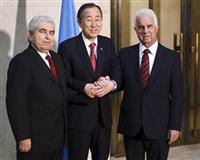 U.N. chief Ban Ki-moon is likely to demand a breakthrough in the chronic Cyprus conflict by March when he meets its rival leaders on Wednesday, in a growing sign of impatience with dragging peace negotiations.

Sources close to the talks said that in his second meeting in two months, Ban will press home the need for faster progress from President Demetris Christofias, the Greek Cypriot leader, and Turkish Cypriot leader Dervis Eroglu.
The two sides have made little headway in talks since 2008.
Cyprus watchers said the Geneva encounter was a precursor to a meeting in March to take stock of consultations on the long-frozen conflict, which obstructs Turkey's admission into the European Union.
"The underlying message is that by March he (Ban) will want them to have resolved most outstanding issues, if not all of them," a diplomatic source familiar with consultations told Reuters on condition of anonymity.
A Western diplomat added: "They (the sides) have not covered as much ground as hoped." In a report to the Security Council last November, Ban warned that Cypriot talks ran the risk of "foundering fatally" if a deal were not reached by this June because of Turkish and Greek Cypriot parliamentary elections.. He also said he would review the U.N. presence on the island and make recommendations based on developments in negotiations.
Divided Cyprus, a member of the EU but with effective membership only extending to Greek Cypriots in the south of the eastern Mediterranean island, has defied countless mediation attempts over the decades.
Split since 1974, the frozen conflict is a source of contention between NATO allies Greece and Turkey. It also complicates defence cooperation between the EU, of which Greek Cypriots are a member, and NATO, of which Turkey is a member.
Mediators are trying to unify the island as a two-zone federation of the two communities, though they acknowledge that talks cannot drag into perpetuity.
"The Secretary-General will want to see more involvement, some more progress," the first source said, adding that mediators needed reasons to "stick around".
To date, the most contentious issue in these talks is how to reconcile the property rights and claims of thousands of internally displaced persons. More than 200,000 people, presently a fifth of Cyprus's combined population of around one million, are internally displaced.
The United Nations guards a 180-km (110-mile) long ceasefire line splitting Cyprus, now largely peaceful. Its peacekeeping operations are separate from its mediators, known as the Good Offices Mission. The U.N. pulled out its mediators when a reunification blueprint it prepared was rejected by Greek Cypriots in 2004, but they returned for the new round of talks launched in 2008.