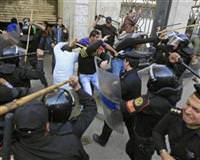 Police fought with thousands of Egyptians who defied a government ban on Wednesday to protest against President Hosni Mubarak's 30-year-old rule, firing rubber bullets and tear gas and dragging away demonstrators.

In central Cairo, demonstrators burned tires and hurled stones at police. In Suez, protesters torched a government building as protests intensified in other parts of the country.

Two people died in Cairo as protests unfolded but security officials contradicted each other on the circumstances. One told reporters a protester and a policeman were killed in clashes. But another official later said they died in a traffic accident.

The scenes, rare in a tightly run nation with a fragmented opposition movement, follow the overthrow two weeks ago of another long-serving Arab strongman, Tunisian leader Zine al-Abidine Ben Ali, in a popular revolt.

Emboldened by the Tunisian uprising and frustrated by corruption, poverty and repression, protesters in Egypt have demanded that the 82-year-old Mubarak step down.

"The people want the regime to fall," they chanted. On Tuesday, the first day of rallies known as the "Day of Wrath" among activists, three protesters and a policeman were killed.

Security forces have arrested about 500 demonstrators over the two days, an Interior Ministry source said. Witnesses said officers, some in civilian clothes, hauled away people and bundled them into unmarked vans. They beat some with batons.

The coordinated protests were unlike anything witnessed in Egypt -- one of the United States' closest Middle East allies -- since Mubarak, a former air force commander, came to power in 1981 after President Anwar Sadat was assassinated by Islamists.

Trade Minister Rachid Mohamed Rachid canceled a trip to the World Economic Forum in Davos. He gave no reason.

Police fired shots into the air near the central Cairo court complex, witnesses said. In another area, they drove riot trucks into a crowd of about 3,000 people to force them to disperse.

One anonymous protester in Cairo told Reuters: "The main tactic now is we turn up suddenly and quickly without a warning or an announcement. That way we gain ground."

Prominent reform campaigner Mohamed ElBaradei, who lives in Vienna, has decided to return to Egypt on Thursday, his brother said. Baradei, formerly head of the United Nations' nuclear watchdog authority, is a vocal advocate of political change. But the exact purpose of his trip was not clear.

Social networking sites such as Twitter and Facebook have been a key means of communications for the protesters. Egyptians complained Facebook and Twitter were subsequently blocked, but many accessed them via proxies. The government denied any role.

Showing their determination to continue, a new Facebook group was created calling for a weekend protest on Friday. It secured 18,000 supporters within hours. A Facebook spokesman in London said it had not seen any major changes in traffic from Egypt. Twitter confirmed its site was blocked on Tuesday.

The United States said Egypt, the most populous Arab state, was still a "close and important ally." But U.S. Secretary of State Hillary Clinton also urged the government to allow peaceful protests and not to block the social networking sites.

"We believe strongly that the Egyptian government has an important opportunity at this moment in time to implement political, economic and social reforms to respond to the legitimate needs and interests of the Egyptian people," she said.

Analysts said the United States probably wants to avoid adding to political uncertainty by abandoning Mubarak. Egypt's peaceful if chilly relationship with Israel is, for Washington, a bulwark of stability in the unsettled region.

Elections are due to be held in September but few had doubted that Mubarak would remain in control or bring in a successor in the shape of his 47-year-old son Gamal.

"Mubarak never experienced this level of public anger and such a rejection of his legitimacy in 30 years of power," said analyst Issandr El Amrani. "This looks quite bad for him."

Father and son both deny that Gamal is being groomed for the job but the Egyptian street does not believe them.

"Gamal, tell your father that Egyptians hate you," protesters yelled in Cairo on Wednesday.

Hundreds of demonstrators had gathered early on Wednesday outside the morgue in Suez, at the southeastern end of the canal which links the Mediterranean to the Indian Ocean. They demanded the release of the body of a protester killed there on Tuesday.

"The government has killed my son," the Suez protesters chanted outside the morgue. "Oh Habib, tell your master, your hands are soiled with our blood," they said, referring to Interior Minister Habib al-Adli.

Hundreds also gathered outside Cairo's journalists' union. Police beat some with batons when they tried to break a cordon and protesters on buildings threw stones at police below.

Demands posted on Facebook included the resignation of Mubarak and Prime Minister Ahmed Nazif, the dissolution of parliament and formation of a national unity government.

The prime minister said the government was committed to allowing freedom of expression by legitimate means and said police in Tuesday's demonstrations had acted with restraint.

"The Arab citizen is angry and we feel broken as citizens. Reform is the name of the game, and reform has to happen now all over the Arab world," Moussa told Reuters in Davos.

Investors fretted over the instability. Egypt's stock market, shut on Tuesday for a holiday, fell 6 percent on Wednesday, the Egyptian pound hit a six-year low against the U.S. dollar and the cost of insuring Egyptian debt against default rose.