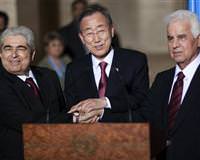 Greek and Turkish Cypriot leaders have agreed to ramp up negotiations to end the conflict on their divided island, but the process remains "very sensitive," the head of the United Nations said Wednesday.

"I have pledged to make myself available to them again soon to continue to take stock of progress and to encourage the parties in further narrowing the differences," he said.

"There has been progress since we last met in November. Based on discussions today, it is clear that the two leaders worked to move closer together through a range of bridging proposals," he said. "Nonetheless, more work must be done to reach further convergences on the outstanding core issues."

Cyprus has been split since 1974, and the United Nations guards the island's 180-km (110-mile) ceasefire line.

The two sides have made little headway in talks since 2008 to resolve the conflict that is blocking Turkey's bid to join the EU and causing strains between Greece and Turkey.

Sources close to the negotiations say Ban has been pressing the rival leaders to resolve their major outstanding issues by March, ahead of Turkish and Greek Cypriot parliamentary polls.

Ban declined to take questions from the press after his remarks and news conferences with the Greek and Turkish delegations planned for Wednesday afternoon were canceled.

"This is a very sensitive process of negotiation," Ban said.

In a report to the Security Council in November, Ban said he would review the U.N. presence on the Mediterranean island and make recommendations based on developments in the negotiations, which have been largely stalled since 2008.

Among the most contentious elements of the talks is how to reconcile property rights and claims among those uprooted by the conflict. More than a fifth of Cyprus' population of around 1 million people are internally displaced.