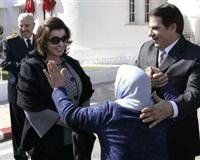 Tunisia has asked Interpol to help arrest ousted president Zine al-Abidine Ben Ali, his wife Leila Trabelsi and other members of the family who fled the country during an uprising, the justice minister said on Wednesday.

He named seven members of Ben Ali's family in Tunisian custody but said that Imed Trabelsi, a nephew of Leila Trabelsi, and Sakher al-Materi, Ben Ali's son-in-law, had fled abroad.

He said the name of Leila's brother Belhassan Trabelsi had also been presented to Interpol.

Chebbi said six members of Ben Ali's presidential guard in custody, including Ali Seriati, would be tried for "conspiring against state security and inciting people against each other with weapons."

He said no legal action was in the works so far against Ben Ali's Interior Minister Rafik Belhaj Kacem who led efforts to crush the uprising when it broke in late December. Ben Ali fired him a few days before he fled.