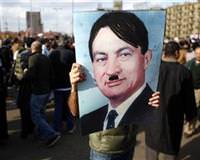 The United States urged Egyptian President Hosni Mubarak on Monday to do more than name a new government in response to mass protests and sent an envoy to Cairo to reinforce the message.

Former U.S. ambassador to Egypt Frank Wisner was on the ground in Cairo as U.S. officials sought to bring pressure on Mubarak without openly calling on him to step down.

Officials said the Egyptian government needs a path to a credible presidential election in September as part of an "orderly transition." Also needed are a lifting of emergency law and negotiations with a broad cross-section of Egyptians, including opposition groups, they said.

State Department spokesman P.J. Crowley said Wisner "has the opportunity to gain a perspective on what they're thinking and what their ideas are in terms of process that we've clearly called for."

Still walking a diplomatic tightrope, the White House insisted President Barack Obama was not calling on Mubarak to step down after a week of street protests against him and said it was up to the Egyptian people to decide their own future.

Still, the United States has started to think about the long-term implications of the protests and scenarios for what might come next, according to an analyst who was present at a White House meeting on the subject.

Obama has voiced concerns to aides that any U.S. effort to insert itself into the situation could backfire.

After a weekend in which Mubarak named a new vice president but still clung to power, White House spokesman Robert Gibbs said, "This is not about appointments, it's about actions."

"Obviously there is more work to be done. ... The way Egypt looks and operates must change," Gibbs said.

As the crisis led to an surge in crude oil prices, a U.S. lawmaker called on the White House to set aside its delicate balancing act and call on Mubarak to step down.

"While initially it may have been prudent for the Obama administration to walk that rhetorical tight rope to keep the confidence of regional leaders, that moment has surely passed," said Democratic Representative Gary Ackerman.

Brian Katulis, a Middle East expert at the Center for American Progress who attended a meeting with White House national security aides and outside analysts on Monday, said the administration was thinking about what will happen next.

"They were very focused on ... some of the longer term consequences, not only in Egypt but also the consequences this may have on the region," he said.

The problem for U.S. policymakers is: who would replace Mubarak, a stalwart ally for 30 years? They fear the possibility of radical Muslims taking over in a country of paramount strategic importance to Washington.

Stephen Grand, a Middle East expert at the Brookings Institution, said U.S. officials "seem to have in mind a managed transition that avoids the creation of a vacuum that extremist elements might exploit."

"This could mean the creation of a caretaker government that oversees the rewriting of the constitution and the holding of free and fair elections," he said.

The crisis is taking its toll on oil markets.

Brent crude oil futures surged to $101 a barrel, a 28-month high, as anxieties rose that protests in Egypt could spark instability across the Middle East and disrupt oil shipments through the Suez Canal.

U.S. stocks rose as investors focused on the expanding U.S. economy and rising earnings, satisfied the situation in Egypt would not escalate into widespread violence or turmoil. The broad Standard & Poor's 500 Index closed up 0.77 percent, at 1,286.12.

Egypt's Suez Canal allows the transport of crude oil and liquefied natural gas bound for the U.S. and other countries.

National security aides at the White House were monitoring the effect the unrest and uncertainty in Egypt may have on oil and financial markets. Gibbs said no disruptions had been reported in the Suez Canal.