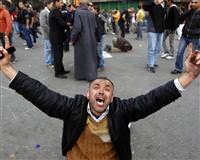 Egypt's armed forces on Wednesday told protesters clamoring for an end to President Hosni Mubarak's 30-year-rule that their demands had been heard and they must clear the streets.

The army warning came as international pressure grew on Mubarak to quit and his closest ally, the United States, told him bluntly that a political transition must begin immediately.

But an opposition coalition called for the protests in Cairo's Tahrir (Liberation) Square to continue.

Crowds gathered in the square for a ninth day of protests, rejecting Mubarak's promise on Tuesday that he would not stand in elections scheduled for September. They want him to go now.

A military spokesman, addressing the protesters on state television on Wednesday morning, said: "The army forces are calling on you. You began by going out to express your demands and you are the ones capable of restoring normal life."

It was a clear call for protesters to leave the streets. And although the army had previously said the people had "legitimate demands" and soldiers would not open fire on them, it set up a possible confrontation if they failed to do so.

At the same time, curfew hours were eased.

Meanwhile the ripple effect of the Egyptian uprising spread across the Middle East, with Yemeni President Ali Abdullah Saleh saying on Wednesday he was ready to give up power in 2013.

Mubarak's offer to step down in September was his latest gambit in a crisis that erupted last week as public frustration with corruption, oppression and economic hardship boiled over.

At the weekend he reshuffled his cabinet and promised reform but it was not enough for protesters. One million took to the streets of Egyptian cities on Tuesday calling for him to quit.

Retired diplomat and Nobel peace laureate Mohammed ElBaradei, who has emerged as a leading figure in an opposition coalition that includes the Islamist Muslim Brotherhood, dismissed Mubarak's latest move as a "trick."

International backing for Mubarak, for three decades a stalwart of the West's Middle East policy and styled as a bulwark against the spread of militant Islam, has crumbled as he tried to brazen out the crisis.

U.S. President Barack Obama spoke to Mubarak for half an hour by telephone on Tuesday night after the 82-year-old strongman announced his plan to step down in September.

"What is clear and what I indicated tonight to President Mubarak is my belief that an orderly transition must be meaningful, it must be peaceful and it must begin now," Obama said after speaking to him.

The conversation was frank and direct and left no doubt that "the time for transition is now, it can't be put off," a senior U.S. official said in Washington.

Pressure also came from Turkey, an important diplomatic voice in the Muslim world. Prime Minister Tayyip Erdogan said Mubarak's plan to step down did not meet the people's expectations and the change should begin sooner rather than later.

Some of the few words of encouragement for him have come from oil-giant Saudi Arabia, a country seen by many analysts as vulnerable to a similar outbreak of discontent.

Israel, which signed a peace treaty with Egypt in 1979, is also watching the situation in its western neighbor nervously, weighing the possibility that anti-Israeli Islamists might gain a share of power.

At least 1,500 people were in Tahrir Square again on Wednesday morning. Many had camped in tents and under blankets, determined to stay until Mubarak goes.

Banners measuring some 20 meters read: "The people demand the fall of the regime." Many downtown shops remained closed.

Many analysts see the army as trying to ensure a transition of power that would allow it to retain much of its influence.

But some said tensions could rise even within the army if Mubarak were to hang on too long, and if senior officers were seen to be protecting a leader who had lost legitimacy.

"The longer this goes on, the more people will associate the military top brass with Mubarak. That is very dangerous," said Faysal Itani, a Middle East expert at Exclusive Analysis.

The uprising was inspired in part by a popular revolt in Tunisia last month which overthrew long-ruling President Zine al-Abidine Ben Ali. The mood is spreading across the region.

King Abdullah of Jordan replaced his prime minister on Tuesday after protests there.

Yemeni President Ali Abdullah Saleh, a key U.S. ally in the fight against al Qaeda, said on Wednesday he will not seek to extend his presidency, a move that would end his three-decade rule in 2013.

Oil prices continued to climb on Wednesday on worries that unrest in Egypt would trigger regime change across the Middle East and North Africa, driving North Sea Brent crude toward a 28-month high.

But with Mubarak pledging to go, foreign investors have begun to show renewed interest in Egyptian bonds and stocks.