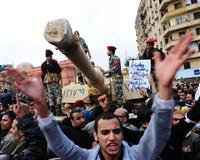 Erol Candabakoğlu, a correspondent for Turkey’s Fox TV assigned to Cairo, has been kidnapped in Egypt.

Candabakoğlu called an AA correspondent by cell phone and stated that he had been kidnapped by assailants wielding knives and sticks as he was shooting in the Bolak neighborhood of the capital.
Turkey's Ambassador to Cairo has already begun meeting with Egyptian officials to ensure Candabakoğlu is found.

CANDABAKOĞLU STATES HE IS IN GOOD CONDITION
Fox TV correspondent Erol Candabakoğlu called a correspondent for the Anatolian News Agency to announce that he had been kidnapped in Cairo and was in good condition.

Stating that he had been kidnapped along with his cameraman and driver, Candabakoğlu explained that he was in the Şarbak region and that he was in good condition, but he requested help.
Candabakoğlu also mentioned that his abductors were each carrying knives and cleavers.