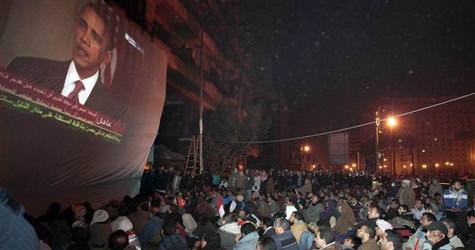 What started with Prime Minister Erdoğan’s call to Husnu Mubarak for a transition has now come to Obama making the final point: do not wait until September, step down immediately.

Following Prime Minister Erdoğan's lead, after he called on Mubarak to not resist change, United States President Obama made a phone call to Mubarak. Supposedly, during the 30 minute conversation, Obama told Mubarak to immediately begin the process of transition.
Later, United States President Barack Obama delivered an address from the White House yesterday regarding the developments in Egypt. Obama explained that when he spoke with Mubarak over the phone he underlined the necessity of beginning the transition process immediately in order to ensure a peaceful and quiet shift of power in Egypt.
EUROPE SAYS 'STEP DOWN'
French President Sarkozy has also announced his belief that the government in power must change immediately. England's Prime Minister Cameron has stated, "The transition process in Egypt must be fast and started immediately.
THE STRONGEST VOICE
According to Financial Times daily, Erdoğan's call on Mubarak to not refrain from change was the strongest voice expressed in the region. The Wall Street Journal newspaper wrote that Erdoğan has begun to exert pressure on Mubarak.
Erdoğan states; "We are expecting Mubarak to take a very different step. This is what the public expects. The current administration gives no reliance when it comes to democracy. It is crucial that this period is surpassed with a transitional administration put in power."
According to President Gül, the transition process in Egypt should not last long. Commenting on the developments in Egypt, President Gül states, "The more attention paid to the demands of the public, the better everything will be. It is very important that the transition process happen very soon."
Speaking to journalists, Prime Minister Erdoğan states; "We are not the kind of country that will be watching this from the stands." Erdoğan went on to qualify the ongoing events transpiring in Egypt by stating, "The genie is out of the bottle in Egypt."