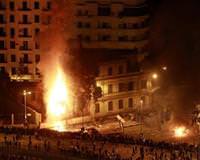 It was the biggest spike in violence since protesters angered by oppression and hardship launched an unprecedented challenge to Mubarak's 30-year-rule 10 days ago. Many accused the government of backing the pro-Mubarak supporters.

Mubarak said on Tuesday he would step down in September, angering protesters who want him to quit immediately and prompting the United States to say change "must begin now."

Al Arabiya television quoted a doctor at the scene as saying four people had been killed and 13 were wounded in the overnight violence in Tahrir Square which began around 4 a.m. on Thursday, and which was shown live on television.

"It's really a battlefield," a witness who gave her name as Mona told al Jazeera. But she said the protesters would not give up. "We are not leaving this place until Mubarak leaves."

After more than an hour of intense firing, television stations showed live footage of two bodies being pulled from the scene, while Mubarak supporters and protesters hurled stones at each other. Black smoke billowed over the area.

Shortly before dawn, television footage showed army vehicles being deployed among protesters. But fighting continued between protesters and pro-Mubarak supporters.

After Mubarak said in a nationally televised address on Tuesday that he would step down in September, the army told protesters to go home.

But with many saying they would not call off their protests until the 82-year-old president quit, Mubarak backers, throwing petrol bombs, wielding sticks and charging on camels and horses, attacked protesters in Tahrir Square on Wednesday.

Anti-Mubarak demonstrators said the attackers were police in plainclothes. The Interior Ministry denied the accusation, and the government rejected international calls to end violence and begin the transfer of power.

This apparent rebuff along with the spike in violence -- after days of relatively calm demonstrations -- complicated U.S. calculations for an orderly transition of power in Egypt.

In pointed comments, a senior U.S. official said on Wednesday it was clear that "somebody loyal to Mubarak has unleashed these guys to try to intimidate the protesters."

By nightfall on Wednesday, the protesters were still holding their ground in Tahrir Square. Skirmishes continued into the night, with blazes caused by firebombs.

After a brief period of calm, a barrage of gunfire could be heard ringing out for more than an hour.

Skirmishes between Mubarak supporters and protesters continued into the Wednesday night, and then after a brief lull, live television aired footage of fresh fighting, gunfire ringing out repeatedly across the square.

Two bodies were shown being pulled from the scene, while Mubarak supporters and protesters hurled stones at each other. Black smoke billowed over the area.

By dawn, protesters had held their ground in the square, setting up iron barricades to protect themselves. "We cannot go back at this point," a 33-year-old woman told al Jazeera.

Hundreds of people milled around the square. "One way or another we will bring Mubarak down," chanted some. Others shouted: "We will not give up, we will not sell out."

"Things have calmed down now but through the night, we were getting dozens of wounded every 15 minutes," Doctor Mohamed Abdel Hamid, who was in the square, said. "We had casualties all over the place.

Some questioned why the army had not intervened when the shooting broke out, though by dawn, military vehicles were deployed at the edge of the square and television showed footage of some men being arrested.

An estimated 150 people have been killed so far and there have been protests across the country. United Nations human rights chief Navi Pillay said up to 300 people may have died.

Egyptian Vice President Omar Suleiman on Wednesday urged the 2,000 demonstrators in Tahrir Square to leave and observe a curfew to restore calm. He said the start of dialogue with the reformists and opposition depended on an end to street protests.

But the opposition, which includes the Islamist Muslim Brotherhood and Nobel peace laureate Mohamed ElBaradei, have said they will not open talks until Mubarak quits.

A Egyptian Foreign Ministry statement on Wednesday rejected U.S. and European calls for the transition to start immediately, saying they aimed to "incite the internal situation" in Egypt.

Oil prices have climbed on fears the unrest could spread to other authoritarian Arab states including oil giant Saudi Arabia or interfere with oil supplies from the Red Sea to the Mediterranean through the Suez Canal. Brent crude surpassed $103 a barrel on Thursday.

Some analysts suggested the violence could encourage a backlash against Mubarak both internationally and among those Egyptians who had accepted his pledge to step down in September.

Along with the United States, France, Germany and Britain have also urged a speedy transition.

But others feared he could either cling on to power, or hand over to a military ruler without allowing truly free and fair democratic elections.

"Mubarak fooled us all," one person in Tahrir Square shouted through a loudspeaker.