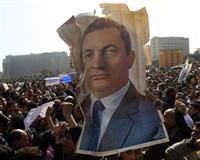 Ankara is already analyzing who will replace Hosni Mubarak when he is forced to leave from the uprising which all began with the street protests which were ignited by Tunisia then later jumped to Egypt in immeasurable proportion.

Ankara is putting their concern for the region to the table…
For Ankara, the possibility of Mubarak appointed the current Egyptian vice president Omar Suleiman in lieu of his own son is being perceived as yet just another bad option amongst other bad scenario as all Ankara wants for the Middle East is for there to be an "orderly transition".
Ankara's analysis of Egypt's axis to come is as follows:
Egypt's most organized opposition, the Muslim Brotherhood must democratize in order to be able to respond to the public's demands.
Opposition leader Mohammad El Baradei will only be influential in the transition process and in preparing a new constitution.
The sole route for Israel is peace. This is possible due to border parameters established following the 1967 war.
Taking its strength from the nation's clan coalition and high income level's, it would take awhile for the street uprisings in Egypt to be reflected onto Saudi Arabia.
Palestine will also be affected by this transitional process.
In the new Egyptian era, instead of competition with Iran, the objective is to establish cooperation.