Mubarak still in power as government and opposition talk 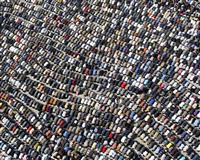 President Hosni Mubarak held onto power Monday, defying a popular uprising against his autocratic rule, after the government opened talks with opposition groups to resolve Egypt's deepest crisis in 30 years.

The banned Muslim Brotherhood was among the groups who met with officials over the weekend, a sign of how much has already changed in 13 days that have rocked the Arab world and alarmed Western powers.

But opposition figures said their core demand that Mubarak must go immediately was not met. Some expressed concern that the government was playing for time in the hope that Mubarak would hang on until September, when his current term expires.

People in central Tahrir Square, focal point of an uprising that has seen hundreds of thousands of protesters take to the streets and clashes in which an estimated 300 people have been killed, said they would intensify their battle to oust him.

After nightfall Sunday, soldiers fired shots in the air to try to disperse the crowd. But the demonstrators, who on Saturday lay down in front of army tanks, remained and the troops abandoned the attempt.

The nation got back to work Sunday and banks reopened after a week-long crisis with lines of customers seeking access to their accounts.

Government ministers will hold their first full cabinet meeting Monday since Mubarak reshuffled his cabinet on January 28 in an attempt to mollify protesters enraged by years of corruption, economic hardship and political oppression.

But it was far from certain that the situation had been defused, despite appeals from longtime Mubarak backer the United States for an "orderly transition" to more democratic rule.

The presence at the talks of the banned Muslim Brotherhood, whose members have for years been repressed by Mubarak's feared security forces, was a significant development.

The demonstrators around Tahrir Square, largely young and secular, lack their clear organization and leadership.

The government said after the meeting, chaired by Vice President Omar Suleiman, they agreed to draft a road map for talks, indicating Mubarak would stay in power to oversee change.

It would also move to release jailed activists, guarantee press freedom and lift Egypt's emergency laws. A committee was set up to study constitutional issues.

But the opposition said the government failed to meet their demand for a complete overhaul of the political system.

Abdel Monem Aboul Fotouh, a senior Brotherhood figure, said the government statement represented "good intentions but does not include any solid changes."

Opposition activists reject any compromise which would see Mubarak hand over power to Suleiman but also serve out his term -- essentially relying on the old authoritarian system to pave the way to full civilian democracy and saving his face.

Nobel peace laureate Mohamed ElBaradei, who has emerged as a figurehead for the opposition coalition, criticized the fledgling negotiations and said he was not invited.

"It is all managed by the military and that is part of the problem." he told NBC television in the United States.

Gamal Soltan, editor of the al-Mesryoon newspaper, said the protesters would not leave before their demands were met.

"The problem is that the regime's hesitancy in taking serious steps will lead to complications and the increase of the popular demonstrations and possibly force an army intervention," he said.

However, former cabinet member Rachid Mohamed Rachid, said: "I believe the presence of Mubarak in the next phase of transition for the next few months is very critical."

The United States, which had bankrolled Mubarak and the army to the tune of $1.3 billion a year, was taken by surprise by the uprising against a ruler it saw as a bastion against Islamic militancy and a friend, albeit a reluctant one, of Israel.

It has called for gradual change and an orderly transition but has given confused messages about when exactly it thought Mubarak should step down.

In Washington Sunday, President Barack Obama said he believed Egypt was "not going to go back to what it was," and that the time for change was now. But in an interview with Fox News, he said only Mubarak knew what he was going to do.

Obama also said he believed the Muslim Brotherhood was only one faction in Egypt and that strains of their ideology were anti-American -- comments that could the anger the powerful Islamist group.

Thousands of people gathered in Tahrir Square again on Sunday but in the evening, soldiers fired shots in the air in a failed attempt to disperse the crowd.

"The coward is a coward and the brave is a brave and we will not leave the square," said Sameh Ali, a protester in his 20s.

But many Egyptians, even some who joined the demonstrations, say they are desperate for a return to normal life.

Shops have been closed, making it hard for people to stock up on basic goods. Some prices have risen.

The currency could face pressure Monday when banks outside the Middle East reopen after the weekend. The pound fell Sunday when trade resumed in Egypt but the drop was less sharp than many traders had expected as the central bank appeared to support the currency.

Another confidence test will be a central bank auction of 15 billion pounds ($2.6 billion) of short-term Treasury bills, postponed from last week. The stock market is still closed.