Families hope for freedom of Americans held in Iran 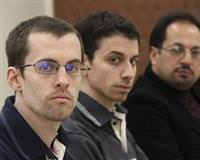 The families of two Americans held by Iran on suspicion of espionage expressed hope on Monday the pair's Sunday court appearance in Tehran moves them closer to freedom, while the United States renewed its call on Iran to release them.

Shane Bauer and Josh Fattal, held since July 2009, pleaded not guilty in court on Sunday on the first day of their closed-door trial in the Iranian capital, according to state-run English language Press TV. No date has been set for the trial to resume, it added.

"We are pleased that Shane and Josh have had the opportunity to explain their innocence to the court and hope that the Iranian authorities will now move to resolve their case so that they finally can come home after 18 months of detention, isolation and uncertainty," the families of Bauer and Fattal said in a statement.

Bauer and Fattal were arrested on July 31, 2009, near Iran's border with Iraq, along with a third American, Sarah Shourd, who was released on $500,000 bail in September and returned home.

The three Americans, in their late 20s and early 30s, say they were hiking in the mountains of northern Iraq and, if they crossed the unmarked border into Iran, it was by mistake. Under Iranian law, espionage can carry the death penalty.

"Now that the court has heard their testimony first hand, we hope and pray that truth and justice will at long last prevail. In the meantime, we continue to worry terribly about their well-being after such a lengthy detention," the families said.

State Department spokesman P.J. Crowley told reporters the United States is "aware that the trial is proceeding" and "I believe that there has been a continuance."

"And we continue to call on the government of Iran to release the two hikers," Crowley said. "They've been in custody for far too long."

The case has further complicated relations between Iran and the United States that already are strained over Iran's nuclear program. The two countries have no diplomatic relations.