Forget Egypt, check out our neighbors… 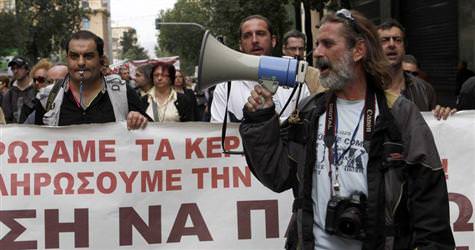 Frustrated by Greece’s new belt-tightening measures, the Greek public has now begun to revolt increases of up to 40% on public services by stating ‘I won’t pay.’

As of February 1st, a number of increases by up to 40 percent on public transportation services have infuriated the Greek public. A group of Athenians, protesting the high price increases of public services, have begun an 'I won't pay' movement at the city's highways, hospitals and metros. The group which initiated the noncompliance movement is urging the public to not pay for transportation, toll roads and even their water and electricity bills. As participation in the protest continues to increase daily, the movement is now spreading nation-wide.
METROS AND HIGHWAYS
As part of the movement, every morning protesters are covering ticket-machines at the entrances of metro stations and are lifting barriers on toll roads. Citizens are passing through without paying.
AND ALL WHILE THE IMF IS IN ATHENS…
Protesters are distributing brochures at hospitals telling patients not to pay for services. Meanwhile, having struggled with the crisis for a year now, a new EU and IMF committee is in Athens in order to inspect expenditures in Greece.