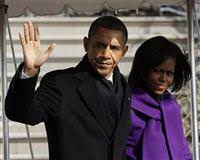 It has been "almost a year" since the president had a cigarette, his wife told reporters at a White House luncheon to mark the first anniversary of her "Let's Move" childhood health initiative.

"It's been a while and I'm very proud of him," she was quoted as saying by The Washington Post. "I haven't poked and prodded. When somebody is doing the right thing, you don't mess with them."

White House spokesman Robert Gibbs said in December that Obama appeared to be making progress in his struggle to give up cigarettes and was chewing nicotine gum as a replacement. He said then he had not seen or witnessed any evidence of Obama smoking in probably nine months.