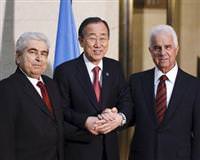 Peace talks to resolve the conflict in ethnically split Cyprus, an obstacle to Turkey's EU membership, will be intensified in coming weeks, a UN official said on Wednesday.

Cypriot President Demetris Christofias, the Greek Cypriot leader, and Turkish Cypriot leader Dervis Eroglu have agreed to a schedule of weekly meetings and their aides twice a week, United Nations special envoy Alexander Downer said.
"The Secretary-General discussed the issue with the leaders and they all agreed it would be valuable to intensify the talks, and to keep the momentum going in the process," said Downer, a former Australian foreign minister appointed to oversee the slow-moving Cyprus talks process in 2008.
The conflict is harming Turkey's bid to join the European Union, where the island is represented by its Greek Cypriots who will not acquiesce to Ankara joining until there is a deal on the island.
The United Nations has shown an increased engagement in Cyprus in the past year, with Secretary-General Ban Ki-moon meeting its leaders twice in the past three months.
Downer said Ban wanted to meet with the leaders again soon for an update on talks. Diplomats say this meeting is tentatively scheduled for late March to early April. In the meantime, Ban was expected to give the Security Council a report on the state of play in talks this month. In his last report in November 2010, he warned that negotiations ran the risk of "foundering fatally" if a deal were not brokered by this June because of Turkish and Greek Cypriot parliamentary elections.
Last Update: Feb 10, 2011 12:08 pm
RELATED TOPICS