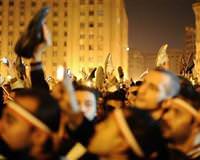 A furious wave of protest finally swept Egypt's President Hosni Mubarak from power on Friday after 30 years of one-man rule, sparking jubilation on the streets and sending a warning to autocrats across the Arab world and beyond.

Mubarak, the second Arab leader to be overthrown by a popular uprising in a month, handed power to the army after 18 days of relentless rallies against poverty, corruption and repression caused support from the armed forces to evaporate.

Vice President Omar Suleiman said a military council would run the affairs of the Arab world's most populous nation. A free and fair presidential election has been promised for September.

Ecstatic Egyptians celebrated in carnival mood on the streets and people embraced in Cairo's Tahrir, or Liberation, Square, the main focus for protest. Many simply sobbed for joy.

"Nightmare over!" said tailor Saad el Din Ahmed, 65, in Cairo. "Now we have our freedom and can breathe and demand our rights. In Mubarak's era, we never saw a good day. Hopefully now we will see better times," said Mostafa Kamal, 33, a salesman.

A speaker made the announcement in Tahrir Square where hundreds of thousands danced and sang, chanting: "The people have brought down the regime." Others shouted: "Allahu Akbar (God is greatest)." Women ululated in jubilation.

"GREATEST DAY IN MY LIFE"

The crisis that brought down Mubarak was the worst since British-backed King Farouk was toppled in a military coup staged by a group of officers in 1952. Generals have ruled ever since.

"This is the greatest day of my life," said opposition activist and Nobel Peace laureate Mohamed ElBaradei, welcoming a period of sharing of power between the army and the people. He told Reuters that running for president was not on his mind.

President Barack Obama was informed in a meeting of Mubarak's decision and he watched television coverage from Cairo. The White House was to make a statement later.

The confrontation had raised fear of uncontrolled violence in Egypt, a linchpin U.S. ally in an oil-rich region where the chance of chaotic unrest spreading to other long stable but repressive states troubles the West.

Financial markets welcomed the news, seeing less chance of a conflict in the oil-rich region. Swiss authorities said they had frozen assets that may belong to Mubarak.

Washington has called for a prompt democratic transition to restore stability in Egypt, a rare Arab state no longer hostile to Israel, guardian of the Suez Canal linking Europe and Asia and a major force against militant Islam in the region.

Al Arabiya said an army statement would announce the sacking of the cabinet, the suspension of the upper and lower houses of parliament and that the head of the constitutional court would lead with the military council.

Egypt's powerful military gave guarantees earlier on Friday that promised democratic reforms would be carried out but angry protesters intensified an uprising against Mubarak, marching on the presidential palace and the state television tower.

It was an effort by the army to defuse the revolt but, in disregarding protesters' key demand for Mubarak's immediate removal, it failed to calm the turmoil that has disrupted the economy and rattled the volatile Middle East.

The tumult over Mubarak's refusal to resign had tested the loyalties of the armed forces, which had to choose whether to protect their supreme commander or ditch him.

The army statement noted that Mubarak had handed powers to govern the country of 80 million people to his deputy on Thursday -- perhaps signaling that this should satisfy demonstrators, reformists and opposition figures.

"This is not our demand," one protester retorted, after relaying the contents of the army statement to the crowd in Tahrir Square. "We have one demand, that Mubarak step down." He has said he will stay until September elections.

The Muslim Brotherhood, an Islamist opposition group, urged protesters to keep up mass nationwide street protests, describing Mubarak's concessions as a trick to stay in power.

The army had said it confirmed "the lifting of the state of emergency as soon as the current circumstances end," a pledge that would remove a law imposed after Mubarak became president following his predecessor Anwar Sadat's assassination in 1981. It has long been used to stifle dissent.

It further promised to guarantee free and fair elections and other concessions made by Mubarak to protesters that would have been unthinkable before January 25, when the revolt began.

TOO LITTLE TOO LATE

But none of this was enough for many hundreds of thousands of mistrustful protesters who rallied across the Arab world's most influential country on Friday, fed up with high unemployment, a corrupt elite and police repression.

After the fall on January 14 of Tunisia's long-time leader Zine al-Abidine Ben Ali, which triggered protests around the region, Egyptians had been demonstrating in huge numbers against rising prices, poverty, unemployment and their authoritarian regime.

World powers had increasingly pressured Mubarak to organize an orderly transition of power.

Mubarak was thrust into office when Islamists gunned down his predecessor Sadat at a military parade.

But he always kept a tight lid on political opposition.

Mubarak resisted any significant political change even under pressure from Washington, which has poured billions of dollars of military and other aid into Egypt since it became the first Arab state to make peace with Israel, signing a treaty in 1979.