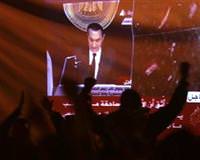 Egyptian President Hosni Mubarak has resigned on the 18th day of protests against his rule.. Here is a timeline of Mubarak's rule:

Oct. 6, 1981 - Vice-President Hosni Mubarak is thrust into office when Islamists gun down President Anwar Sadat at a military parade. He is approved as president in a referendum in November and re-elected in Oct. 1987 and Oct. 1993.

June 26, 1995 - Gunmen attack Mubarak's car as he arrives at an Organisation of African Unity summit in Ethiopia's capital Addis Ababa. He is unhurt and returns to Egypt. Mubarak later blames a Sudanese man for the attempt.

Oct. 5, 1999 - Mubarak is sworn in as president for his fourth term and names Atef Obeid as prime minister after the government led by Kamal Ganzouri resigns.

March 2005 - Street protests by the Kefaya (Enough) Movement draw hundreds across Egypt to oppose a fifth term for Mubarak or any attempt to install his son Gamal in his place. Days before, police say they detained about 200 members and supporters of the Muslim Brotherhood.

May 11, 2005 - Parliament votes to change the constitution to allow contested presidential elections, dismissing opposition complaints that strict rules would prevent genuine competition. A referendum later in May overwhelmingly confirms the constitutional change.

Sept. 27, 2005 - Mubarak is sworn in for a fifth consecutive term after winning the first contested presidential election on Sept. 7. Rival Ayman Nour is the only member of parliament to remain seated during the ceremony, apparently to show his refusal to accept the official vote count.

Dec. 8, 2005 - The Muslim Brotherhood increase their seats in parliament after an election marred by violence, but Mubarak's party retains a big majority. Eight people were killed on the last day of voting on Dec. 7. The Muslim Brotherhood says it has won 12 seats, expanding its parliamentary bloc to 88, nearly a fifth of the seats and its strongest showing ever.

Nov. 19, 2006 - Mubarak says he will retain his responsibilities for the rest of his life.

June 4, 2009 - U.S. President Barack Obama in a speech in Cairo calls for a "new beginning" in ties between Washington and the Islamic world.

March 26, 2010 - Former U.N. nuclear chief Mohamed ElBaradei makes first public appearance after his return to Egypt in February. ElBaradei has said he would consider a presidential bid if demands are met, including constitutional changes to limit power.

Nov. 29, 2010 - The Muslim Brotherhood says a rigged election has all but wiped out its presence in parliament, virtually eliminating opposition to Mubarak's ruling party before a 2011 presidential vote. The group skirts a ban on religious parties by running independents.

Jan. 28 - Mubarak orders troops and tanks into cities overnight to quell demonstrations across Egypt. The U.N. later says around 300 people have been killed in the protests.

Jan. 31 - Egypt swears in a new government. New Vice-President Omar Suleiman says Mubarak has asked him to start dialogue with all political forces.

Feb. 1 - More than one million people around Egypt call for an end to Mubarak's rule.

Feb. 6 - Opposition groups, including the banned Muslim Brotherhood, hold talks with the government, chaired by the vice-president.

Feb. 8 - Suleiman says Egypt has a timetable for the peaceful transfer of power.