Showdown in Egypt as Mubarak hangs on 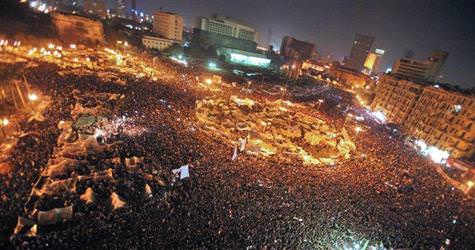 Egypt's people-power protesters, reeling with disillusion and anger after President Hosni Mubarak disappointed hopes he was about to resign, planned massive new demonstrations on Friday that may test the army's loyalties.

Increasingly sour confrontation after 17 days of unrest has raised fears of violence in the most populous Arab nation, a key U.S. ally in an oil-rich region where the chance of disorder spreading to other repressive states has troubled world markets.

U.S. President Barack Obama also sounded less than satisfied by Mubarak's latest concessions, saying he must explain changes he was making and do more to offer a path toward democracy.

For some hours on Thursday, following a military communique that many read as an army move to strip the 82-year-old former general of the power he has held for 30 years, rallies in Cairo and other cities turned festive in anticipation that Mubarak was about to resign in a televised address to the nation.

Within minutes of that broadcast starting, however, they were waving shoes and jeering as the president launched into a lengthy explanation of his own role in supervising a review of constitutional arrangements before he would step down, as he had said last week, at a presidential election due in September.

He praised the young protesters who have derided him as a corrupt and brutal dictator -- "your demands are legitimate and just" -- and sympathized with families of the 300 or more killed by his forces -- "I have felt all the pain you have felt." And, finally, he said he would transfer powers to his new deputy.

Vice President Omar Suleiman, a 74-year-old former intelligence chief who has maintained close relations with the United States and Israel, later appeared on television himself to promise a "road map" to democratic elections.

However, demonstrators, who two weeks ago could scarcely have dreamt of winning such concessions, were not satisfied and said they would continue, potentially in their hundreds of thousands, to press for Mubarak's immediate departure and an end to the military-dominated system in place for six decades.

"No to Mubarak. No to Suleiman. One is an agent and the other a coward," chanted protesters camped out again overnight in central Cairo's Tahrir, or Liberation, Square.

Some tried to march toward some of Mubarak's presidential residences in Cairo but army roadblocks barred their way with barbed wire. The army has been on the streets for two weeks, since police attacked protesters on January 28 and then pulled back. Troops have pledged to protect the right to demonstrate.

However, the lengthening showdown may test that resolve, with many Egyptians eager to end the economic disruption of the protests and the army command keen to show it can impose order.

Soldiers appeared to let some 200 people through to demonstrate outside the state broadcasting building overnight.

"My great fear is that if the demonstrations don't end that the military begins to split over this. You may have younger commanders who don't want to go down with the ship," said Elliott Abrams, a former U.S. deputy national security adviser.

Businessman Naguib Sawiris, chairman of Orascom Telecom and one of the so-called Wise Men who have been seeking to mediate out of the crisis, urged an end to protest.

"The continuation of this anarchy ... will lead to destruction," he told Al Arabiya television, saying people should go home from Tahrir Square. "I hope they leave ... We must preserve the dignity of the president."

But Mohamed ElBaradei, a Nobel peace prize winner and former U.N. diplomat who runs a liberal political movement, wrote on Twitter: "Egypt will explode. Army must save the country now."

Egypt's ambassador to Washington said it was clear that Suleiman was now "de facto president." But Egyptian analysts said Mubarak still appeared to be able to call the shots.

"Mubarak still holds the reins to power and he can easily and at any time retrieve presidential powers from Suleiman," said Hassan Nafaa, a commentator and government critic.

The army, from politically plugged-in generals to poor conscripts and junior officers, is key to what happens next.

"This poses a real dilemma for the army," said Rosemary Hollis at London's City University. "Are they going to allow the demonstrators to escalate their demonstrations so that they push the point that Mubarak has got to go, and that means the army definitely does split with Mubarak? The demonstrators are very disappointed and there will be violence."

Robert Springborg of the U.S. Naval Postgraduate School said: "They are risking not only the coherence of the military but even indeed ... civil war."

Washington's approach to the turmoil has been based from the start on Egypt's strategic importance: a rare Arab state no longer hostile to Israel, the guardian of the Suez canal linking Europe and Asia and a major force against militant Islam in the Middle East.

With the CIA forecasting that Mubarak was about to step down, Obama said before Mubarak spoke that the United States would support an "orderly and genuine transition to democracy." Washington would be publicly uncomfortable if the army held on to power, and also does not want Islamist rule.

After the speech, Obama said in a statement: "The Egyptian people have been told that there was a transition of authority, but it is not yet clear that this transition is immediate, meaningful or sufficient."

Washington has pressed Mubarak to speed the pace of reform but stopped short of demanding the resignation of the president of the country, which has a 1979 peace treaty with Israel and an army which receives about $1.3 billion in U.S. aid a year.

The protests that have shaken the Egyptian political system and the political landscape of the Middle East was partly inspired by the example of Tunisia, where street protesters toppled the president on January 14.

Eight weeks ago to the day on Friday, a young man in the provincial city of Sidi Bouzid set himself alight on the main square in protest after police confiscated the vegetable cart with which he was trying to scrape a living.

The wave of anger which Mohamed Bouazizi set in motion across the Arab world has drawn comparisons with the toppling of communist leaders in eastern Europe in 1989. Governments from Morocco to Yemen have made concessions to people unhappy with rising prices and unemployment and a lack of political freedoms.