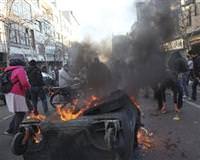 Thousands of Iranian opposition activists rallied in support of popular uprisings in Egypt and Tunisia on Monday and a semi-official news agency said one person was shot dead and several wounded by protesters.

An opposition website said dozens were arrested while taking part in the banned protests, which amounted to a test of strength for the reformist opposition in the Islamic state.

By late evening, chants of "Allahu Akbar" (God is Greatest) echoed from Tehran rooftops in scenes reminiscent of 2009 protests against the disputed reelection of President Mahmoud Ahmadinejad. Eight people were killed in those mass street demonstrations which lasted about a month and resulted in many arrests and several executions.

A witness said security forces fired teargas to scatter thousands marching toward a Tehran square on Monday. There were also clashes between police and demonstrators, and dozens of arrests, in the city of Isfahan, another witness told Reuters.

The semi-official Fars news agency cited violence on the part of protesters in a report that could herald a hard line by authorities clearly eager to head off any resurgent opposition.

"One person was shot dead and several were wounded by seditionists (opposition supporters) who staged a rally in Tehran," Fars said, without giving further details.

Some Tehran protesters chanted "Death to the dictator" during protests, which continued in some places into the evening. Other demonstrators marched in silence.

Some chants drew comparisons between the Iranian leadership and the autocrats deposed in recent weeks in Tunis and Cairo.

By late evening, the protests appeared to have eased off.

"Iranians have a right to gather to peacefully express their support for the people of Egypt and Tunisia," it said.

Iranian Supreme Leader Ayatollah Ali Khamenei has called the uprisings in Egypt and Tunisia against secular, Western-allied rulers an "Islamic awakening," akin to the 1979 revolution that overthrew the U.S.-backed shah in Iran.

But the opposition see events in Tunisia and Egypt as resembling their own protests after the June 2009 election which they say was rigged in favor of President Ahmadinejad.

Police in Bahrain, where tensions arise from discontent among a Shi'ite majority, fired teargas and rubber bullets to break up pro-reform demonstrations and witnesses said one protester was killed. Analysts say any large-scale unrest in Bahrain could embolden marginalized Shi'ites in nearby Saudi Arabia, the world's biggest oil exporter.

British Foreign Secretary William Hague said of the action against Iranian protesters: "President Ahmadinejad ... told the Egyptian people that they had the right to express their own views about their country. I call on the Iranian authorities to allow their own people the same right."

Large numbers of police wearing riot gear and security forces were stationed around the main squares of the capital and pairs of state militiamen roamed the streets on motorbikes.

There were minor clashes at some points across the sprawling capital city of some 12 million people, witnesses said. Mobile telephone connections were down in the area of the protests.

Video posted on the Internet showed young men, some holding sticks, gathered around overturned garbage bins, some of which were on fire. The demonstrators marched toward Azadi (Freedom) Square, a traditional rallying point for protests. Hundreds of marchers also gathered in Isfahan and Shiraz, witnesses said.

Noting official Iranian backing for demonstrations in Egypt and Tunisia, Mousavi and Karroubi asked permission to hold their own marches in solidarity. But authorities refused, wary of a repeat of the protests in 2009, which saw the greatest unrest since the revolution of 30 years earlier.

Turkish President Abdullah Gul, on a visit to Tehran, called on Middle Eastern governments to listen to their people.

The Iranian authorities accuse opposition leaders of being part of a Western plot to overthrow the Islamic system.